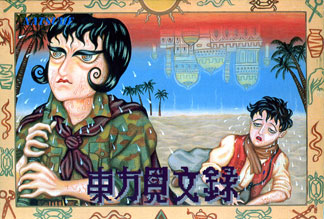 Meet our heroes: Bunroku and Marco, in Shifting Sand Land of all places.
Advertisement:

Touhou Kenbun Roku ("The Travels of Marco Polo") is a text based adventure game, released for the Famicom by Natsume as a Japanese exclusive. It focuses on a troublemaker known as Bunroku, whom travels to the times of famous explorer Marco Polo.

Despite the fact that the title has "Touhou (東方)" on it, it hasn't any relation to the ZUN's long-running video game franchise. This is an actual Japanese word meaning "Eastern" which can also be read as "Higashikata".