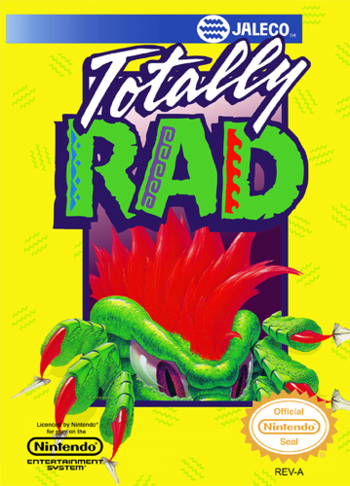 "THANKS FOR BUYING TOTALLY RAD FROM JALECO, DUDES. IT'S JUST ONE OF MANY MOST EXCELLENT AND BODACIOUS GAMES WE WILL BE BRINGING OUT FOR YOUR NES."
Totally Rad instruction manual
Advertisement:

If Bill & Ted made a videogame, this would be it.

Then Jaleco USA localized it as Totally Rad. The main character and his girlfriend were replaced with a bodacious surfer dude and his happenin' babe. The plot was mostly kept the same, but was turned into a self-parody, featuring exaggerated and ridiculous surfer dude slang throughout. It concerns Jake, an apprentice to the magician Zebediah Pong, who is learning magic. However, his girlfriend Allison is kidnapped, and Jake has to take off to save her. Afterward, Jake discovers Allison's kidnapping was just a feint to force Allison's father, a renowned scientist, out of hiding. Jake must not only rescue Allison's father, but ultimately take down an evil underground king who plans to lead a group of under-dwellers up to take over the surface of the world.

The game is perhaps best known for inspiring the webcomic Kid Radd.

This totally excellent game has examples of only the most extremely bodacious tropes, as follows: