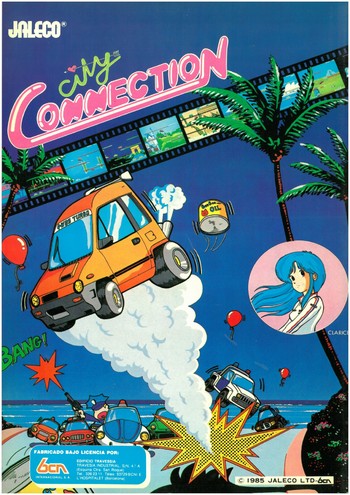 City Connection is a sidescrolling platform Maze Game made by Jaleco that was released in 1985. In the game, you control a female driver named Claricenote Yes, she was one of the first video game heroines alongside Reika Kirishima. Even earlier than Samus Aran, who debuted in 1986. As for why she's not as well known, see below in She's a Man in Japan., who goes across the world looking for love and painting every section of the roads in her Honda City hatchback. Complicating matters are the various police cars pursuing her and an odd cat who's just... standing on the road like an idiot.

The game was ported to the NES and the MSX. It also had a 2004 sequel for mobile phones called City Connection Rocket that featured Clarice as a spy for a secret organization trying to capture criminals around the world. Clarice herself also appears as a playable character in GUNbare! Game Tengokunote albeit as a short-haired blonde for some reason as well as in Game Tengoku CruisinMixnote based on her actual appearance as DLC. She also made another appearance in a version of Conga Master called Conga Master Cruisin as a playable character.

Also an interesting bit of trivia: there exists a Japanese record/game company that had obtained Jaleco's assets ever since their parent company went belly up and has a subsidiary specializing in rereleasing soundtracks of old games. Their names? City Connectionnote even going as far as to have Clarice's car as part of their logo! and Clarice Disc.