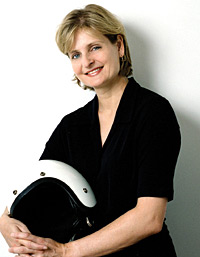 Catherine "Cathy" Weseluck (born August 21, 1970 in Toronto, Ontario) is a Canadian voice actress who works for distributing companies Funimation and Marathon Productions. She is credited with providing the voice for characters in various anime series (most by The Ocean Group). In addition to her voice-over work, Cathy is also a voice instructor and voice director. In fact, she was even the voice director for the My Little Pony G1 series My Little Pony Tales.
Advertisement:

As a side note, she's on record for saying her favorite shows she's worked on are Cybersix, Death Note, and My Little Pony: Friendship Is Magic.