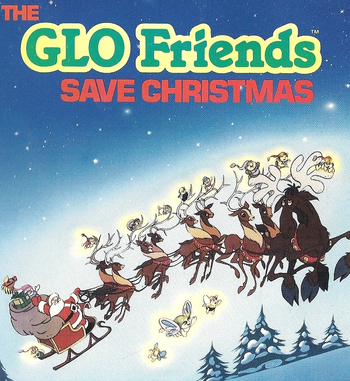 Part of the My Little Pony 'n Friends anthology cartoon series, Glo Friends aired alongside Moondreamers and Potato Head Kids. It ran for 26 episodes and had 3 serials, with a preceding TV special called The Glo Friends Save Christmas.

The Glo Friends are a community of small, glow-in-the-dark insects that live in Glo Land, a magical kingdom located in the middle of a forest. Their homes are built near the Glo Pond, from where they harvest a substance known as Moondrops. These Moondrops literally drip down from the moon and the Glo Friends collect them and take them back to the Glo Pond in plastic buckets. These buckets are then emptied into the lake. These Moondrops are what sustains them and enables their ability to glow in the dark.

At one point, the pond springs a leak and the Glo Friends have trouble finding replacement Moondrops to refill the pond. If they fail, they will cease to glow in the dark. The Glo Friends live a peaceful existence, but it's continually threatened by Starnose, the leader of the Moligans. They are a group of mole-like monsters that wish to abuse the Glo Friends' ability to light up the night. The Moligans were banished from the kingdom of Moleslavia by King Mole for several crimes which include mob action, robbery, looting, cheating, and unlawful digging.

The Moligans have been living underground and planning revenge against King Mole ever since their banishment. They are short-sighted, so they were unsuccessful in their attempts to harvest gold from some nearby mines. As such, the Moligans have attempted to enslave the Glo Friends to power their lanterns, allowing them to see in the darkness of the mines, harvest the gold and then buy out the kingdom of Molslavia.