Western Animation / George of the Jungle (2007) 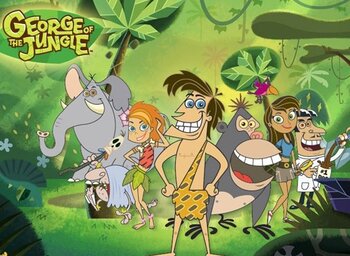 A 2007 remake of Jay Ward's iconic 1967 cartoon of the same name, George of the Jungle is a Canadian-American cartoon produced between Canada's Studio B Productions and the American Classic Media (now a subsidiary of Dreamworks Animation) in association with Cartoon Network and Teletoon.

In a lot of ways, it's similar to the original show, following the misadventures of everyone's favorite heroic but thick-skulled Tarzan pastiche as he protects the rainforest from various threats with the help of an ape named Ape who is his best bud, his pet elephant Shep who thinks he's a dog, and the Tookie-Tookie Bird. However, Ursula is reimagined from George's shapely wife to the daughter of a scientist who has arrived from civilization to explore the rainforest, and taking on the original Ursula's jungle girl role and appearance is a new character named Magnolia. The show's Lemony Narrator remains ever-present, but joining the cast are now Ursula's scientist father and a diminutive witch doctor known only as the Witch Doctor.

This reboot originally ran for a single season of 26 episodes, but after several years in dormancy, the show was suddenly and unexpectedly Uncancelled in 2015 for a second season when Teletoon suddenly decided to commission for itnote This isn't as strange as it sounds, as Teletoon has suddenly ordered a new season of a previously ended show before; in 2000, Nelvana's Babar series was suddenly revived with a new season on Teletoon nearly a decade after it ended on CBC. Due to some convoluted changes in the show's rights between seasons, the new season was instead created between Canada's Yowza Animation and Singapore's August Media Holdings, and also featured an entirely new voice cast and production team due to work on the show entirely moving over from Vancouver (where Studio B Productions is located) to Toronto (the home of Yowza Animation). Season 2 ran for another 26 episodes and retooled the series significantly, most notably redesigning George to look more like his original incarnation and completely overhauling Ursula and Magnolia's characters (most significantly by switching their names around). The second season debuted in 2015 on various children's networks across Europe, and eventually came over to North America in 2016, where in the United States, it aired on Kabillion.

"George of the Jungle (Season 2)" provides examples of: