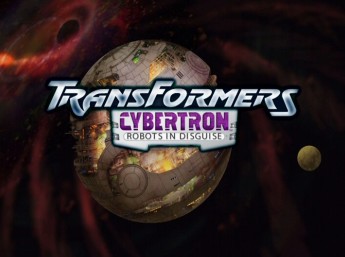 Optimus Prime: Our worlds are in danger! To save them and the galaxy, we must find the four Cyber Planet Keys before the Decepticons can use them for evil! It is our mission! Hot Shot! Jetfire! Vector Prime! Landmine! Scattershot! Optimus Prime! Transform and roll out!
Advertisement:

The entire universe is in danger! The ancient, planet-sized Transformer known as Unicron, whose spark was contained by the Autobots in a sun in Transformers Energon, has now turned into a black hole called the Unicron Singularity. It is sucking the universe up, and only the four Cyber Planet Keys, each stored on a different planet, can stop its destructive power.

Oh, and due to the Unicron Singularity, all the Transformers are back on Cybertron, there are new characters and some of the old ones no longer exist. note However, it's vague enough that one could argue that the Unicron Singularity connected the Armada and Energon universe to the Cybertron reality, and Transformers Cybertron's reality is suffering from the actions of the Autobots and Decepticons from that universe.

Generally considered by fans to be the best of the Unicron Trilogy, which started with Armada and continued with Energon, Transformers Cybertron is a fairly unassuming yet fun series that stands out against Armada and Energon because even though it's not astoundingly good, it's at least light-years ahead of Energon.

Like Energon before it, Cybertron—co-produced between GONZO and Sunwoo Entertainment instead of either Actas or Studio A-Cat—was animated with a mixture of hand-drawn animation and CGI. However, Cybertron used more traditional CGI for the Transformers, in line with what had been used for Beast Wars and Beast Machines. This made the CGI all the more conspicuous, but also allowed for slightly better facial animation (and movement in general). The fact that the scripts were better also allowed for better voice acting.

"The Autobots wage their battle...to DESTROY the evil forces of the Decepticons."
Feedback

Optimus and Leobreaker use their time spent combining to inform Starscream just how the power of teamwork is going to teach him a lesson.

Optimus and Leobreaker use their time spent combining to inform Starscream just how the power of teamwork is going to teach him a lesson.