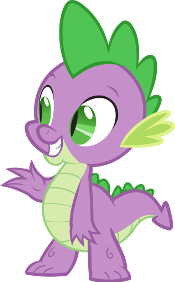 Fillies love him, bronies want to be him.
Click here to see him from Season 8 onwards (spoiler warning) 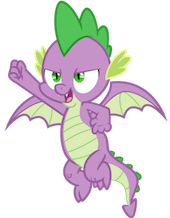 "You really should lighten up, Twilight. It's a party!"
Debut: "Friendship is Magic, part 1" ("Mare in the Moon")
Voiced by: Cathy Weseluck, Motoko Kumai (Japanese)

A baby dragon and Twilight Sparkle's "#1 Assistant", before she moved to Ponyville, Spike was her closest companion, the two sharing a relationship that has been an amorphous combination of mother-son, older sister-little brother, and boss-employee. As Twilight's assistant, Spike is her main point of contact with Princess Celestia, able to breathe dragonfire on her letters to magically send them to Canterlot, and then belching out Celestia's response letter a short time later (fortunately, Twilight's outgoing mail arrives at Celestia in a much more dignified manner).

As the series continues and Spike matures, he gets his own ongoing storylines and arcs, which have resulted in him becoming a famed hero on-par with the Mane Six. The Crystal Empire reveres him as "Spike the Brave and Glorious" for his role in defeating King Sombra, and the leaders of the dragons and the changelings consider him a personal friend. But of course, he's still primarily Twilight's friend and aide, ready to help her with anything she may need, be it an academic test, saving Equestria from destruction, or just keeping Twilight's neurotic mind focused on the task at hoof.

open/close all folders
Tropes #–C
Advertisement:
Tropes D–G
Tropes H–L
Twilight Sparkle: Uh, I don't need to carry you anymore, do I? You have wings.Spike: They are new, and I don't want to overdo it.
Tropes M–R
Tropes S–Z