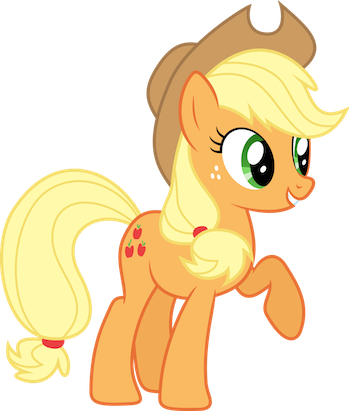 Old school and country!
"This is your sister Applejack, remember? The loyalest of friends and the most dependable of ponies?"
Debut: "Friendship is Magic, part 1" ("Mare in the Moon")
Voiced by: Ashleigh Ball, Sora Tokui (Japanese)

The bearer of the Element of Honesty. An earth pony from the huge Apple family, a herd that runs multiple apple farms across Equestria. Applejack helps run Sweet Apple Acres, the ancestral farm of the family. Sensible and down to earth, she's admired for her honesty and integrity. However, she also has a bit of a stubborn streak at times. Her Pillar of Old Equestria is Rockhoof.

open/close all folders
Advertisement:
Tropes # to H
Tropes I to Z
Feedback

Applejack discovers the true meaning of honesty and proceeds to tell the truth about the Flim Flam Brothers' fake tonic.

Applejack discovers the true meaning of honesty and proceeds to tell the truth about the Flim Flam Brothers' fake tonic.