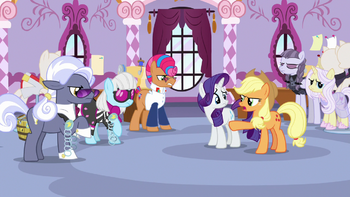 Beg yer pardon, but we don't normally wear clothes!
"At first, I didn't think I'd be much help. But thank goodness I signed on! Without me, they'd be doin' all kinds of crazy fashion-y things!"
— Applejack
Written by Kevin Lappin
Advertisement:

With Spike's assistance, Rarity is walking through Ponyville hanging fliers. Upon approaching Sugarcube Corner, Pinkie Pie inquires about the fliers, which Rarity explains are for potential submissions to her fashion showcase for up and coming designers. She recounts her own difficulties getting started in the industry so hopes to use this showcase to pick the best and the brightest to feature at the Carousel Boutique. For judges, she's selected noted fashion critic Hoity Toity and fashion photographer Photo Finish to help judge, with the final slot being filled by an unexpected pony: Applejack!

This garners some surprised reactions from Spike and Pinkie, along with Applejack herself, who happens to be walking by at that moment and is just finding this out for the first time. Rarity rationalizes her choice because of Applejack's eye for practicality, contrasted against the other two judges' focus on design and color. Applejack objects but Rarity insists she at least sleep on it.

Later Applejack is working the apple fields with Big Macintosh and Apple Bloom. While Applejack explains why she thinks she's a poor choice, Apple Bloom is struggling to catch the apples Applejack is bucking off the trees. Finally Apple Bloom trips on the bow of the large hat she's wearing, which Applejack observes is what's slowing her down. She undoes Apple Bloom's bow, which makes a big difference, and then comes to the realization that she does in fact have the talent to critique the fashion show in the areas Rarity is looking for.

She heads over to the Carousel Botique to volunteer her services just as the other judges also arrive for the contest. The other two judges inform Rarity that Coco Pommel is debuting her own line of clothes in Manehattan and Photo Finish provides some pictures to Rarity. Applejack pipes in and gets introduced by Rarity before being presented the photo of Coco's clothes by Hoity Toity. Applejack scoffs at the strange design, comparing it to a disco ball, which does not earn her good favor from the other judges.

Rarity takes the judges into her workroom to introduce them to the contestants: Lily Lace, Starstreak, and Inky Rose. They each explain their entries, which impress both Photo Finish and Hoity Toity but perplex Applejack's different sensibilities. Eventually Applejack openly expresses her criticisms, which again upsets the other two judges and causes the participants to become disheartened. Applejack begins to doubt her thoughts are being appreciated but Rarity reassures her that this is why she was brought in.

Unfortunately, Applejack's critiques continue to act as a sore spot among the contestants. She dislikes Inky Rose's decision to put prefabricated holes into her clothes, says Lily Lace is using far too much fabric and will cause the dress she's making to collect dirt off the ground, and thinks the mane-do that Starstreak is giving to his model is a mess. Applejack and Rarity leave the botique with everpony else getting sick of her opinions. Upon encountering Pinkie at Sugarcube Corner, Applejack thinks her contributions are doing a lot of good but Rarity is getting frustrated at all of Applejack's commentary.

The day of the contest arrives but Applejack is no less disapproving of the contestants' work. She calls out Inky Rose's design for containing far too many buttons, destroys Lily Lace's hat for being impractically covered with feathers, and mocks Photo Finish and Hoity Toity's idea for adding a belt to Starstreak's outfit by noting that the belts each of them chose are mostly identical. Rarity agrees both look good but this pushes Applejack over the edge and causes her to declare fashion is "ridiculous". This acts as the final straw for the judges and the contestants, who all leave angrily and ruin Rarity's fashion show.

Rarity runs outside and stops construction of the stage. Pinkie Pie arrives and asks what's wrong and Rarity angrily blames Applejack for destroying her hard work but Applejack states that she's just giving her honest opinion. To show Applejack how honesty can be hurtful, She takes Applejack over to Strawberry Sunrise's house and asks for Strawberry's opinion of apples, to which she simply says she doesn't like them. Applejack immediately goes on the defense, which escalates into a venomous argument, but Rarity sarcastically tells her that it's Strawberry honest opinion, and Applejack states that she works hard to make her apples as perfect as can be... which suddenly leads her to realize that Strawberry expressing her opinion without consideration for Applejack's hard work is what Applejack was doing to the contestants, telling them that their work is meaningless if she doesn't like what they make. Applejack apologizes to Rarity for ruining the fashion show with her Brutal Honesty.

Applejack decides she has to make up for causing so much distress to Rarity and the others, so she tracks them all down and brings them back to the Carousel Boutique (in her own Applejack kind of way). She apologizes to Hoity, Photo, and the participants, and says while she still finds their work confusing, it was no excuse to shoot down the work itself. While the contestants resume their contest pieces, Applejack helps rebuild the stage and works with the contestants to get a better understanding of things from their point of view.

Pinkie Pie surprises Rarity with the completed stage and the fashion show goes off without a hitch. When the judging commences, Rarity picks Lily Lace's designs, Hoity Toity leans towards Inky Rose's, and Photo Finish gives Starstreak the nod. Applejack is then charged with deciding a winner between the three contestants. Ultimately, Applejack doesn't pick a winner at all and all three contestants go on to feature their work at the Boutique. While they tour Rarity's design for laying out the three contestants' designs in her shop, they come across a dress Rarity was working on. Applejack tries to critique it, but struggles to find the right words until Rarity simply explains that the dress was a failed experiment, with which Applejack heartily agrees and the two friends laugh about it.

After spending a whole episode being honest but hurtful, AJ finally realizes how much of a jerk she's been.

After spending a whole episode being honest but hurtful, AJ finally realizes how much of a jerk she's been.