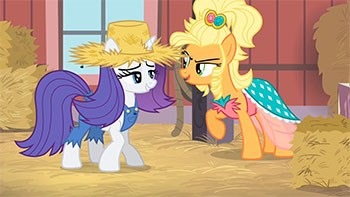 Hmm, something doesn't seem right here, but I can't put my hoof on it.
"Sounds like somepony has a little bit of a crush."
— Twilight Sparkle
Written by Josh Haber
Advertisement:

The Ponyville Days Festival, a celebration of the founding of Ponyville, is three days away, and several ponies have applied to be Master of Ceremonies. When everyone gathers in the village center to see whose proposal has been accepted, Rarity is delighted to be named the winning pony. She has decided to put together a high-class festival focused on "small town chic," featuring a cider tasting, a formal gala, and a fashion show — very ambitious and demanding stuff. But the main source of Rarity's nervous excitement is the upcoming arrival of Trenderhoof, a travel writer (and her Celeb Crush), who is so fashion-forward that he "knows what's going to be hot even before it's tepid."

With Twilight in tow, Rarity meets Trenderhoof at the train station and instantly dissolves into giddy antics; despite this poor start, Trenderhoof seems to be impressed with Rarity and the small town charm of Ponyville, especially Sweet Apple Acres. But when he catches a glimpse of Applejack, hard at work as usual, he becomes instantly smitten, calling her the "pony of his dreams." Rarity's heart breaks.

Trenderhoof's clueless but persistent advances annoy Applejack, who has nothing in mind except finishing her chores and getting Sweet Apple Acres ready for the cider tasting. But Rarity decides that it has become a competition, and she sets out to reclaim Trenderhoof's attention by going more "country". Dressed in her rural best, she returns to Sweet Apple Acres and unconvincingly claims that she's always had a "rustic" side, even attempting to plow fields and buck apples. Alas, Trenderhoof still has eyes only for Applejack. Rarity decides to double down. She completely overhauls the festival's theme from "small town chic" to "Simple Ways", puts on unflattering country clothes, lets her mane go neglected, and tops it all off with an exaggerated Southern drawl. Applejack, thoroughly exasperated, tells her to stop the country pony act and just be herself, but Rarity insists that it's a legitimate aspect of her personality and not something she's doing just to impress Trenderhoof.

At Sweet Apple Acres, Rarity is inflicting her "Simple Ways" outfits on a few fillies when "Apple Jewel" arrives. Carrying herself in an over-the-top imitation of Rarity's fashionista sensibilities, Applejack pretends that her posh pony persona is just how she's always been. Rarity makes a heroic effort to maintain the farm-filly act, but when Applejack's beautiful gown gets splashed with mud she can't take it any longer and reverts to her real self. She confesses that she was so caught up in trying to impress Trenderhoof that she was denying who she really was. By the time Trenderhoof himself shows up, announcing his intentions to move to Ponyville for its "rustic charm," Applejack and Rarity have reconciled, and they join forces to talk him out of it.

After returning her Ponyville Days festival theme to "small town chic", Rarity writes in the Mane Six's journal that you should never change who you are to try and impress someone: if they don't like you for who you are, it's their loss. The high-class affair goes off without a hitch, and Trenderhoof even gives Rarity a rose at the height of her fashion show.