The world of My Little Pony: Friendship Is Magic is vast, with many races beyond just the ponies inhabiting it. Some of these races only feature in a single spotlight episode, while others have bcome recurring staples of the series with several of their members, or the race as a whole, repeatedly featuring in episodes. 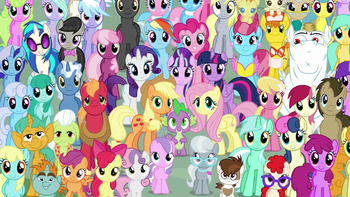 Ponies are the dominant lifeform in the world, inhabiting the kingdom of Equestria that covers much of the world that has been explored in the series. In ancient times the three species of pony were separate tribes, but eventually became united as one tribe that founded Equestria. 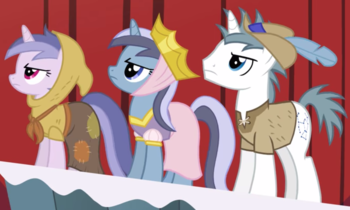 Unicorns are one of the three main breeds of pony. Their horns allow them to cast magic spells, ranging from simple telekinesis to world-bending arcana. While all races have their own form of magic that affords them unique abilities, only the unicorns can utilize theirs in this manner. 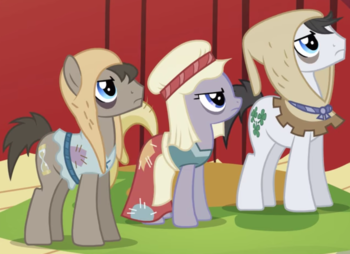 Earth ponies are another of the three main breeds of pony. Their unique abilities are a natural attunement to nature, particularly the cultivation of plants, and superior physical attributes. 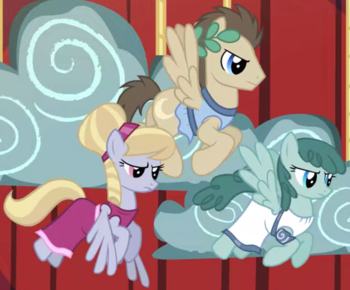 Pegasi are the third main breed of pony. They can fly, of course, walk on clouds, and manipulate the weather, which means they're in charge of maintaining Equestria's weather systems. 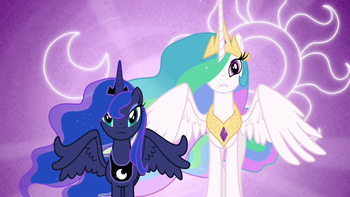 Alicorns are a combination of all three races with all of their abilities. Only a small handful of alicorns exist in the world, and the series has been very vague on where they come from and the full scope of their nature and abilities. What is known is that alicornhood is effectively synonymous with princesshood, with every alicorn bearing the title, and they are exclusively female. Through completion of some great magical feat, some normal ponies can transform into alicorns. 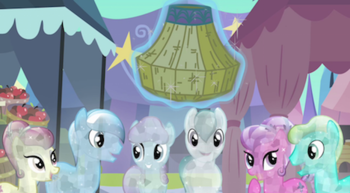 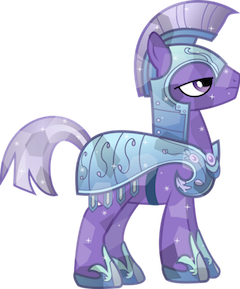 Crystal ponies are a subspecies of earth pony that inhabit the Crystal Empire to Equestria's north. Possessing crystalline, angular designs (though not always noticeable outside of their hair), they can wield a type of magic specific to them thanks to the Crystal Heart that resides in their nation. 1,000 years ago, they and the Crystal Empire were ruled by the tyrannical King Sombra and were banished from Equestria by his curse, but they returned in the modern era during the events of "The Crystal Empire". 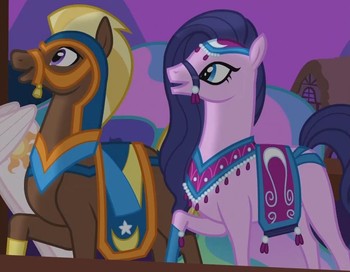 Very little is known of these equine allies of Equestria, with only three having shown up so far in the series and only one of them speaking. They originate in a fairly distant land called Saddle Arabia and do not appear to be true ponies, albeit they do come in at least the equivalent of earth pony and unicorn types. They are characterized by their large size, a lack of cutie marks and bodies with more conventional/realistic horse proportions. 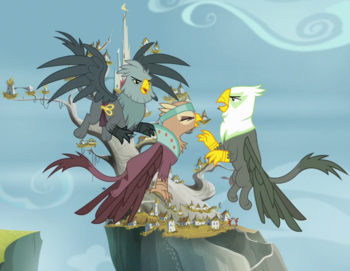 The griffons doing what they do best... not getting along.

Griffons are a race of half-avian, half-feline beings hailing from Griffonstone, a city in the mountains far to the east of Equestria. In ancient times they were a prosperous, mighty people, but fell on hard times after their king's treasure was stolen, although it's implied they're starting to pick themselves back up. 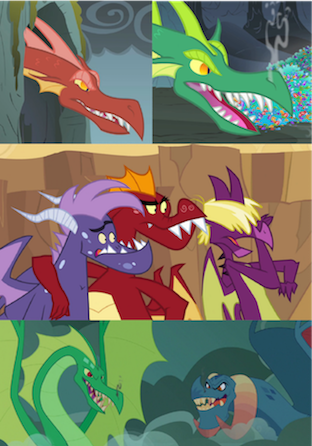 Dragons are a powerful species of winged reptiles that live in the Dragon Lands, far to the southeast of Equestria. They hoard and eat rocks as their primary food source, and particularly love gemstones. Notorious for their aggressive behavior, they follow the rule of the Dragon Lord. 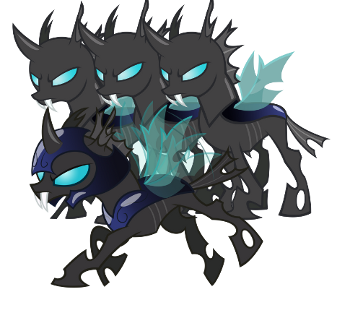 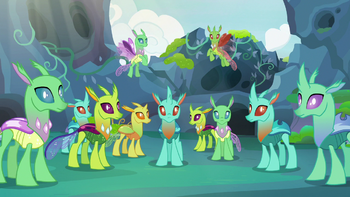 to see them reformed
Debut: "A Canterlot Wedding - Part 2"

A race of shapeshifters that can transform into other beings, and even some inanimate objects. They initially serve Queen Chrysalis as her troops to take over Equestria. However, following Thorax taking command of the swarm at the end of Season Six, they have reformed and are in the process of joining Equestria as a whole as one of many peaceful non-pony races.

From the Expanded Universe Fiendship Is Magic #5 comic, Chrysalis and the changelings are shown to have first come into being as a result of a rotten acorn that fell into a tainted magic pond underneath a graveyard. The seed mutated, grew into a carnivorous plant, and when it was cracked open by accident by Starswirl the Bearded, Chrysalis and her brood sprang forth. 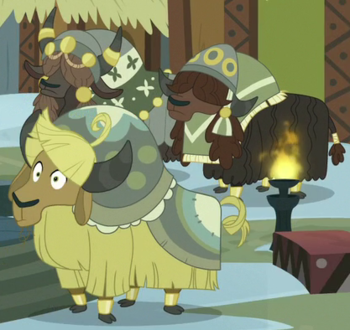 Yaks are large, imposing bovines covered in shaggy fur that live in Yakyakistan, a city far to the north of Equestria. Life in the snowy region is tough and hard, but so are the yaks. While they were an isolated people for many years, they've recently opened their borders to Equestria. They are led by Prince Rutherford. 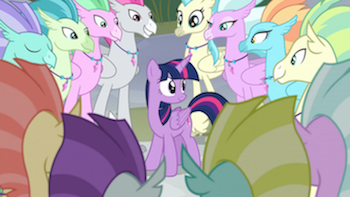 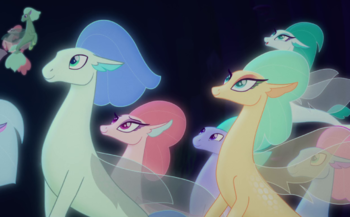 For centuries the hippogriffs — part pony and part eagle — lived on Mt. Aris in peace. When the Storm King came, they fled to the sea to escape, using the Pearl of Transformation to turn into seaponies. With the Storm King's defeat they have retaken their home, but using fragments of the Pearl they wear, they can change between forms at will to live on both land and sea. They are ruled by Queen Novo. 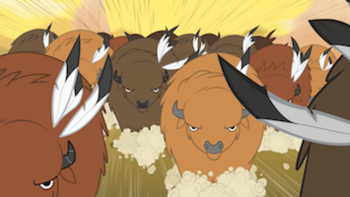 A buffalo (American bison) tribe led by Chief Thunderhooves that lives in the frontier south of Equestria, and comes in conflict with pony settlers when these plant an orchard in their ancestral stampeding grounds in "Over a Barrel". In "The Return of Harmony, part 2", Discord's reign of chaos includes a trio of buffalo ballet dancers who appear in and around Ponyville. 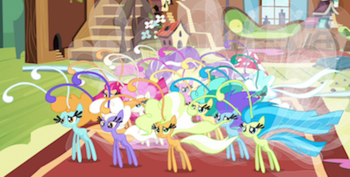 Tiny, fairy-pony-like creatures who need a light breeze to magically fly on delicate damselfly-like wings. They migrate to remote locations to collect pollen and must migrate back to their world before the portal to their world closes, as even the idyllic land of Equestria is a Death World for these tiny beings. 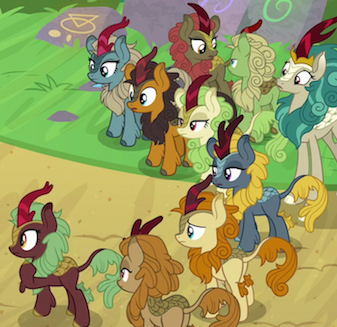 Equines that live in a secluded region of Equestria and have forcibly taken a vow of silence following an incident that led to the accidental destruction of their village. Their home region is also the home of the Nirik, fiery creatures of malice. However, the legends have obscured that the Kirin are the Nirik, and transform when they get angry. They are led by Rain Shine. 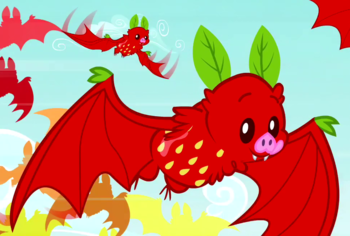 Colorful, batlike creatures with a taste for fruit. A colony of fruit bats roosts in the Apple Family's west orchard, while some others are among the creatures in Flutttershy's animal sanctuary. 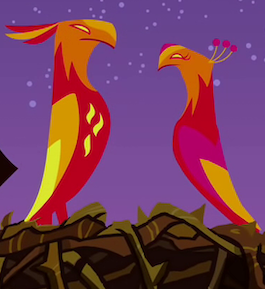 Eagle-like birds with red, orange and yellow plumage, phoenixes are most notable for their ability to be reborn from their own ashes.