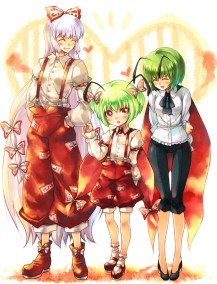 Congratulations! It's a... something!
"Her son was tall and proud, with Drogo’s copper skin and her own silver-gold hair, and violet eyes shaped like almonds."
— A Song of Ice and Fire
Advertisement:

When two or more fictional characters reproduce, a logical next step for many creators is to concoct an appearance for the offspring. One method for reflecting the relationship between the child and their parents is for the creator to make the child resemble both of its parents simultaneously: their body types, hair styles, facial features, and other physical characteristics are patched together to create the child's appearance.

For example, Alice and Bob have a daughter who inherits her mother's freckles and exact hair style, along with her father's eye colour and big feet. Other examples might include a child that has two-toned hair or heterochromia, so that both parents' most recognisable characteristics are represented simultaneously.

As a Sub-Trope of All Genes Are Codominant, real-life genetics may take a back-seat to LEGO Genetics and Artistic License – Biology.

Compare Gender Equals Breed, where the child looks like the parent whose gender it shares, and Strong Family Resemblance, where the child's appearance is based on just one parent.

See Superpowerful Genetics for superpower heredity, and Half-Human Hybrid when one of the parents isn't human (and the hybrid tends to exhibit both traits of the parents). Fan-Created Offspring frequently strongly take after both parents. Mix-and-Match Man is when an artificial person looks like this.