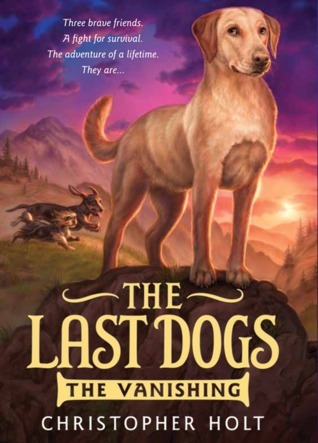 The Last Dogs is a book series written by Christopher Holt, first published in 2012.

The book series begins with The Vanishing, where a Labrador retriever named Max escapes from the vet's kennel and sees that there are no humans left in town. After a fierce encounter with a pack of wolves (led by their aggressive alpha, Dolph), Max and a dachshund named Rocky team up together to set out and find their owners. Along the way, they encounter a group of kibble-loving dogs led by a poodle named Dandyclaw (and where they meet their third traveling companion, Gizmo the Yorkshire terrier), a house full of cats, a gang of rats led by their rhyming king, and a gang of dogs called the Corporation, who want to let society be ruled by dogs and dogs only. All the while, Dolph and his wolves trail Max and his friends, determined to kill them.

Positively not to be confused with The Dogs.

Compare and contrast Survivor Dogs or Dogs of the Drowned City, which have similar themes.

The Last Dogs provides examples of: