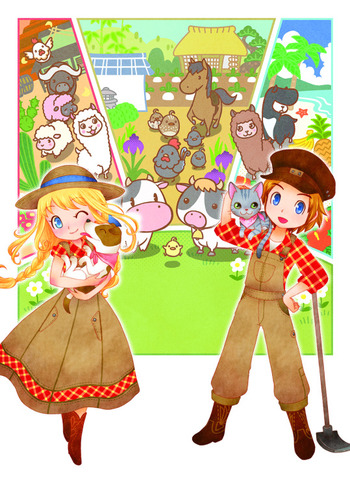 Farm your way to victory!
Advertisement:

Story of Seasons: Trio of Towns (Bokujō Monogatari: Mittsu no Sato no Taisetsuna Tomodachi, lit. Ranch Story: Cherished Friends of Three Towns in Japan) is a 3DS title as part of the newly minted Story of Seasons games.

The game has your protagonist fulfilling a childhood dream of being a farmer by moving to their uncle's farm. As the title suggests, and similar to Tale of Two Towns, there are three different villages with a distinct flavor to them.

The player is tasked with raising their prestige with each town and ultimately gaining their father's approval of their dream. Along the way, they'll grow crops, raise adorable pets, become a renowned chef and/ or fashionista, and discover romance with the locals.