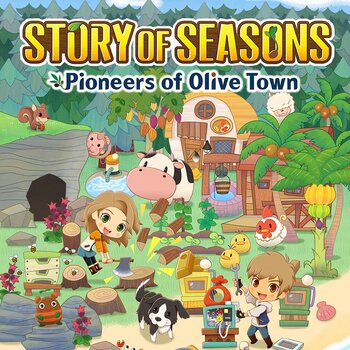 The Player Character's grandfather was one of the founders of Olive Town, where he used to run a farm. Impressed by the tale, they decide to move to Olive Town. Unfortunately, the farm was abandonned long ago, turned into a forest lacking even the remnants of a farm house, while what facilities are left are too damaged to be of any use. Olive Town itself is fortunately still standing and its mayor, who knew their grandfather, is fine with giving the Player Character all the help they need to revive the farm to its former glory. He wouldn't mind a little help turning the town into a popular tourist site, either.

From there, it's the standard Story of Seasons formula: manage the farm, befriend the locals, maybe start a family with one of the latter. The means by which the farm is expanded differs from previous installments in the series in that many crops, animals, and farm facilities need to be salvaged from the forest that the farm has become before more of them can be purchased in town, making exploration necessary to bring more variety in. The farm also happens to be on top of a massive archeological site, which results in various ancient artifacts being found after rainy days or in the mines. And the town has a mostly-empty museum that will be all too happy to get those artifacts, photos of local wildlife, and any fish the player can catch.

Downloadable Content was created to be gradually made available after the game's release for a price, including new areas with characters returning from Harvest Moon: A New Beginning and previous Story of Seasons games.