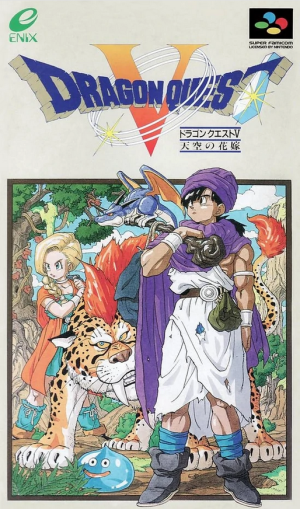 The fifth installment of the Dragon Quest series, and second in the Zenithian trilogy.

Spanning some thirty years, you guide the Silent Protagonist from childhood to adulthood as he follows his father's quest for the Legendary Hero. Along the way, he chooses which of two (or three) beautiful young women to take as his bride: His childhood friend Bianca, the sweet and sheltered Flora / Nera, or Flora/Nera's commanding sister, Debora. She then joins his travels and gives him two lovely children who prove vital to the world's future...

Notable for the addition of Mons, an element not seen in other Dragon Quest games (not the mainstream ones, at least).

It received its own loosely adapted CG movie under the name of Dragon Quest: Your Story, which came out in Japanese theaters on August 2, 2019.