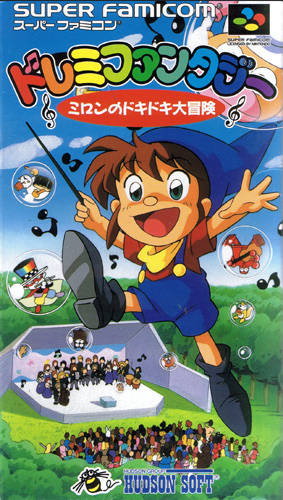 Doremi Fantasy: Milon's Heart-Pounding Big Adventure (Milon no DokiDoki Daibouken) is a game released only on the Super Famicom in Japan, made by Hudson Soft in 1996. The game is a sequel to Milon's Secret Castle. It was later released on the Wii via Virtual Console in Japan, Europe and North America (under the "import" category) in 2008. There is also a fan translation of the game, titled Doremi Fantasy: Milon's Quest.

Basically, the story is that Milon was playing in the forest, when suddenly an evil demon named Amon kidnapped Milon's fairy friend, Alis, and took the music in the land with him. It's up to Milon to go after Amon, defeat his minions, and get the music and Alis back.

You can find an english version online here.