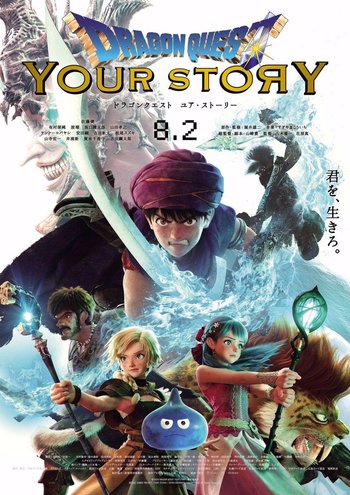 Dragon Quest: Your Story is an anime film adaptation of the 1992 video game Dragon Quest V, released in Japanese theaters on August 2019 and distributed by Toho.

The plot of the movie is essentially the same as the original; A boy named Luca and his father are traveling the world until misfortune fell upon them in the name of the Order of Zugzwang. The order’s leader, Bishop Ladja, murders Luca’s father and forces him into slavery for ten years. When he is able to escape, Luca remembers the final words from his father regarding his missing mother, and decides to search for her and rescue her from the clutches of the Order. To do this, he needs to look for the Zenithian Hero, the fabled savior who can wield the sacred Zenithian Sword, and the only person who can fight back the darkness.

. Netflix picked up the film for international release on February 13, 2020