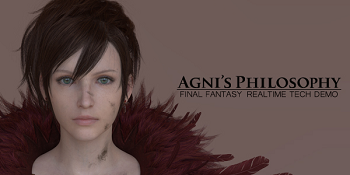 is a graphical tech demo shown at the 2012 E3 conference by Square Enix. It was designed to show off their new Luminous Studio Engine, which can render extremely detailed and realistic graphics in real time, being shown again during the PlayStation 4 announcement conference running on the new hardware, continuing a trend of Final Fantasy related media showing the processing and graphical power of a new home console. As such, it looks very pretty.

The demo shows a very short story starring the title character, Agni. A group of mages performing a ritual around a crystal come under attack by aggressors bearing modern firearms. Their leader is shot and killed, but he passes on a smaller crystal to Agni, who escapes the massacre. She flees into the city, pursued by mutated dogs, and completes the ritual to summon a dragon to save herself. The clip ends with Agni mounting the dragon and flying off, viewing a city in the distance.

Although Square Enix consistently denied it, there were many rumors that this demo's characters or story would feature in a future installment in the epileptic-tree-plantingly popular Final Fantasy series. In particular, it didn't escape notice that the "minister" looks almost exactly like one of the central villains from Final Fantasy XV, that the displayed technology levels (not to mention the general visual design) of FFXV and AP are virtually identical,note never mind the fact that Luminous was developed in no small part for FFXV after the failure of Crystal Tools, and that the playable team for FFXV had neither any truly dedicated spell-casters nor, more infamously, any women. However, in the end the finished product for FFXV didn't feature anything from Agni's Philosophy at all.

, which featured Agni kneeling among ruins and crying... which naturally kicked the above into even further overdrive, because either they're just making Agni their go-to "demo" character, or with that much work they're planning on putting her in a "proper" game of some sort. It's also implied that what's been shown is going to be part of a more substantial updated tech demo.

This demo contains examples of: