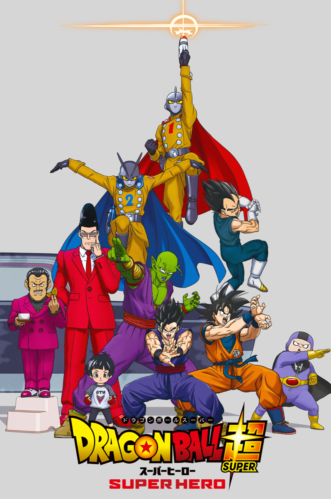 Dragon Ball Super: Super Hero is a 2022 anime film based off the Dragon Ball franchise. It is the second film in the Super series following after Broly, the 21st film overall, and the first to be completely computer generated instead of the traditional style.
Advertisement:

The film sees remnants of the Red Ribbon army still seeking revenge against Goku, having created their own androids to take on the man who singlehandedly destroyed their organization. The androids are made in the form of superheroes who believe Goku to be the enemy and it doesn't take long for a clash to be imminent, made even more likely when Pan, the daughter of Gohan and Videl, ends up kidnapped by them. Will our heroes be able to face these new foes, or will the Red Ribbon Army succeed in their machinations?

The film was set to be released in Japan on April 22nd, 2022 but due to an unfortunate hacking and ransomware incident, the film was ultimately pushed back and released on June 11, 2022. A dub of the movie was released on August 19, 2022. This is also the first Dragon Ball content released under the Crunchyroll banner since Funimation's merger.