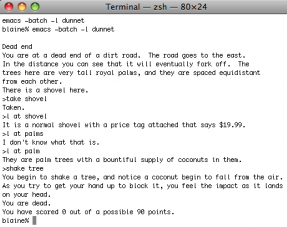 The opening, along with one of the earliest ways to get killed.
Advertisement:

Dunnet is a text adventure by Ron Schnell that comes bundled with Emacs, and so is installed on many macOS computersnote Emacs stopped being included with macOS starting with 10.15 Catalina, and many Linux ones as well. The original version of the game was made in 1982. The version that can be found in Emacs is a port that was made in 1992. This page discusses the Emacs version unless otherwise noted.

The game starts off ordinarily, at the end of a dirt road. However, accessing computers allows you to modify the world in certain ways, and it's implied you are actually Inside a Computer System. The objective of the game is straightforward: collecting treasure.