The supporting characters for the My Little Pony: Equestria Girls series. 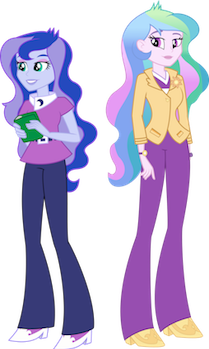 Principal Celestia: The sundial was our year's gift!
Vice-Principal Luna: [coughing] Even though "some people" thought it was a little impractical, since the sundial can't be used at night.
Debut: My Little Pony: Equestria Girls
Voiced by: Nicole Oliver (Celestia), Tabitha St. Germain (Luna)

Principal Celestia and Vice-Principal Luna, clearly older than the student body, are the counterparts for the Princesses, with whom they may share some tropes. Celestia runs the school while Luna is in charge of discipline. 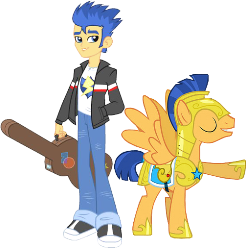 "We've got to stop bumping into each other like this!"
Debut: My Little Pony: Equestria Girls
Voiced by: Vincent Tong

A spiky blue-haired fellow that seems like a nice enough guy. He's a Pegasus Royal Guard in Equestria, while his human counterpart is a guitar player that Twilight befriends during her stay at Canterlot High.

"The Great and Powerful Trrrrrixie is the most talented girl at Canterlot High!"
Debut: My Little Pony: Equestria Girls
Voiced by: Kathleen Barr

Another alternate self of a well-known pony from Equestria, this Trixie is no less hammy than her unicorn counterpart. While she has just a cameo in the first movie, she's elevated to the rank of Rainbow Dash's rival by "Guitar Centered", and to secondary villain in Rainbow Rocks, besides the Dazzlings. Like with the Rainbooms, a lot of tropes pertaining to her pony counterpart also apply to her, although she lacks the Character Development of the latter, at least until Forgotten Friendship.

The human counterpart of one of the most popular background ponies, Vinyl Scratch stars in her own short "Music to my Ears" and plays a small but key role in Rainbow Rocks. Like with other Alternate Self characters, she shares some tropes with her pony counterpart.

Yet another human counterpart of a supporting pony character. Beyond background student, she's a minor antagonist in Rainbow Rocks and stars in her own short, "Photo Finished". The rest of the time, she's busy taking pictures all over Canterlot High. As usual, share tropes with her pony alternate self.

Wallflower Blush
See My Little Pony: Equestria Girls – Villains
Other Alternate Versions
A number of background and supporting characters, not previously listed, are Alternate Selves of their respective pony characters. These include:

According to Sabrina Alberghetti, all other background humans in the movies were new creations for the film and unlikely to appear in pony form on the show itself, nor based on background ponies in the show.

What's a high school without students? While a few students at Canterlot High are easily recognizable as the human counterparts of secondary characters, most are new characters. At the beginning they're divided up into different cliques — the Athletes, the Dramas, the Techies, the Eco-kids, the Fashionistas, and the Rockers. They stick to their own groups because of Sunset Shimmer, but come together later thanks to Twilight Sparkle.

Six more background students are introduced in Rainbow Rocks to provide a pair of bandmates for each Girl Group led by an alternate secondary character, including the Snapshots (with Photo Finish), Trixie and the Illusions, and Derpy and the Muffins.

The human counterpart of Princess Cadance and dean of Crystal Prep, functionally acting as Principal Cinch's right-hand. Following the events of Friendship Games, she takes over as principal from Cinch.

"Hi, everyone! Welcome to Camp Everfree! I'm Gloriosa Daisy, your camp director! Think of me as your friendly camp and nature guide."
Debut: My Little Pony: Equestria Girls – Legend of Everfree
Voiced by: Enid-Raye Adams

The friendly camp director at the titular Camp Everfree. She manages it alongside her brother Timber Spruce.

"Think of me as that awesome guy... who should always be invited to fun things."
Debut: My Little Pony: Equestria Girls – Legend of Everfree
Voiced by: Brian Doe

Along with his sister Gloriosa Daisy, he keeps things running at Camp Everfree as well as he can. A self-described awesome dude who likes to do fun stuff. 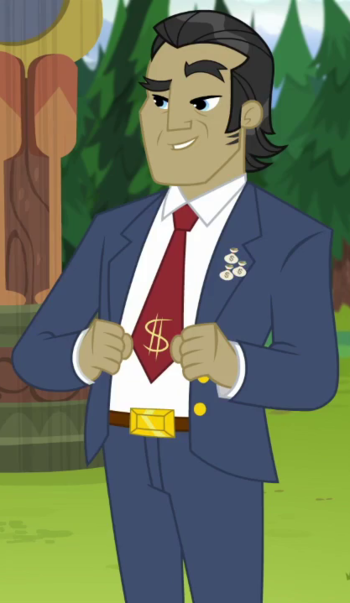 "Instead of turning it into a spa resort that will line my pockets with more money than this camp ever could? I don't think so..."
Debut: My Little Pony: Equestria Girls – Legend of Everfree
Voiced by: Brian Drummond

The human counterpart to Filthy Rich and father to Diamond Tiara. He owns the land Camp Everfree belongs to and plans to replace it with a spa resort.

The director of the upcoming Daring Do movie adaptation, and Juniper Montage's uncle.

A famous movie star who is signed on to play the title role in the latest Daring Do adaptation.

A crew member aboard the Luxe Deluxe and Rarity's love interest.

Other Characters
These characters are not affiliated with either of the two high schools or the summer camp. They have typically appeared only in background or supporting roles so far.