They are the antagonists of the show. They activelynote when they're not banished or turned into stone, that is seek to conquer Equestria, bend its pony denizens to their will and eliminate those who stand in their way of world domination, such as the Princesses and the Elements of Harmony.

See here for the ex-antagonists. 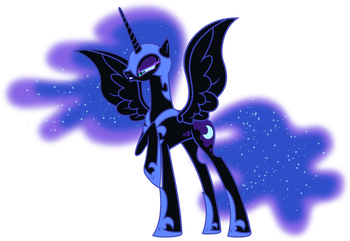 "From this moment forth, the night will last FOREVER! AHAHAHAHAHAAA!!"
Debut: "Friendship is Magic, part 1" ("Mare in the Moon")
Voiced by: Tabitha St. Germain

An evil and wicked creature born from dark magic fueling Princess Luna's jealousy and bitterness. Her desire to create a never-ending night forced Princess Celestia to use the Elements of Harmony to imprison her in the moon, seemingly for eternity. However, after one thousand years, the stars help her to escape, and this time, she attacks first, leaving Equestria stuck on night time. After a short rampage, she is defeated and purified of her darkness by Twilight Sparkle and her friends.

In the comics, it turns out that Nightmare Moon was the product of Luna being corrupted by an outside entity preying on her unhappiness in having her night ignored, nor was she the first. FIENDship Is Magic #4 had her corrupt the inhabitants of the moon into the Nightmare Forces, who would enable her return. See the Expanded Universe characters page for more.

For the Alternate version of Daybreaker; see Friendship Is Magic: Expanded Universe.