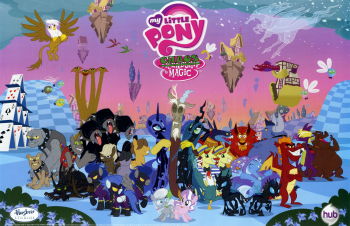 Chaos is a wonderful thing. (Source)

◊note Iron Will isn't on this page, he's over on the Jerks and Bullies page.

Not everyone in Equestria lives in harmony with each other.

Here are a list of antagonists that have appeared in the TV series. Either as recurring Big Bads or single-episode Villain(s)/Monster(s) of the Weeks. These particular characters have been divided into three categories according to their threat level to Equestria and ponykind. Some of them are your typical Big Bad who seek to conquer, enslave, cause chaos, and other really bad things to Equestria and its native pony inhabitants. Others are just Jerks and Bullies who usually appear in Slice of Life episodes. And then are others that are in-between who are just too dangerous to be around with.

Some antagonists are not listed here due to being "special cases" and may be listed in another character page. And finally there are those antagonists outside of the TV show itself and are listed in the Expanded Universe page.

There is also the question of "redeemed villains" or antagonists who have done a Heel–Face Turn. Once an episode about them being a good guy airs after their redemption episode (thus confirming that they have definitely gone to the good side), they are to be moved to the Redeemed Antagonists page. However if they keep changing sides or are just plain old neutral to the whole good and evil thing, then they should be listed in either the Supporting Cast pages (if they lean towards good or neutral) or remain here (if they lean towards evil).