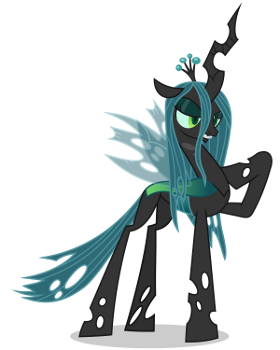 This day is going to be perfect.
"You know what's stronger than friendship, Twilight? FEAR!"
Debut: "A Canterlot Wedding"note She appears in Part 1 masquerading as Princess Cadance. She makes her full physical debut in Part 2.
Voiced by: Kathleen Barr

The former Queen of the changelings, creatures that can transform into other ponies and feed on their love for sustenance. She masquerades as Princess Cadance during the Season 2 finale in a bid to conquer Equestria, but is discovered by Twilight and defeated by Cadance and Shining Armor. She returns in the Season 6 finale with a more ambitious plan, but her subjects turn on her and follow Thorax as their new leader, causing Chrysalis to flee swearing revenge. In the final season, she forms an alliance with Tirek and Cozy Glow to take down Twilight and her friends after being summoned by Grogar.

She appears in IDW's comic books as the main antagonist through the first four-issue Story Arc, and makes several subsequent appearances.

The fake Princess Cadance reveals her true form as Chrysalis, Queen of the Changelings.

The fake Princess Cadance reveals her true form as Chrysalis, Queen of the Changelings.