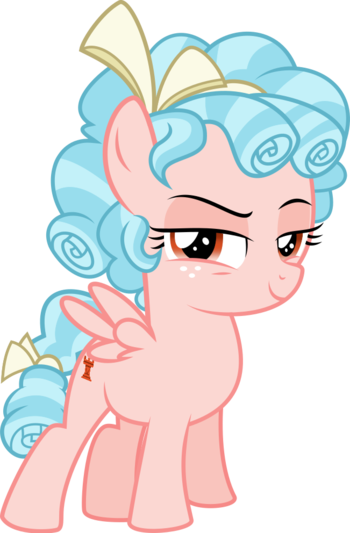 Combine all our strength,
We'll go to any length,
Once we have a better way to be bad!
"With Twilight and her lackeys out of my way, all of Equestria will bow to me! The future Empress of Friendship!"
Debut: "Marks for Effort"
Voiced by: Sunni Westbrook

A Pegasus filly who attends the School of Friendship. Unknown to everyone else, she secretly plots to drain all magic from Equestria and overthrow Celestia, Luna, and Twilight. In the process, she manipulates everypony around her and becomes pen pals with Lord Tirek. However, her plans were foiled by the Young Six and her misdeeds were exposed to everyone she's fooled. The Princesses decided to imprison her in Tartarus with Tirek, though after she spends months trapped there, she was summoned by Grogar, who decided to have her join his alliance so they can defeat Twilight and take over Equestria once and for all.

Advertisement:
open/close all folders
Tropes A to E
Tropes F to P
Tropes R to Y