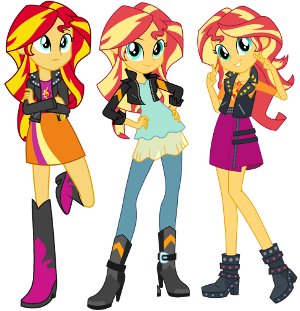 "My past is not today." note Left to right: original design, post-Rainbow Rocks design, post-Summertime Shorts design.
Click here to see her as a pony 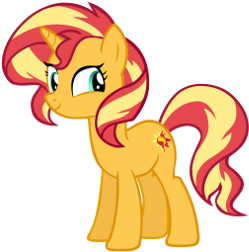 Sunset Shimmer was once a student of Princess Celestia, but she had ambitions of power and prestige that she felt she couldn't get from the princess. Sunset left Equestria through a magic mirror that led her to another dimension of humans. Through manipulation and fear, Sunset established herself as the Queen of Canterlot High School, and plotted to return to Equestria and steal the Element of Magic from Twilight Sparkle, and use it to turn the students of Canterlot High into an army to conquer Equestria. Twilight followed Sunset and foiled her plan, and Sunset was humbled and begged for forgiveness.

Sunset eventually redeemed herself in the eyes of her peers and become The Protagonist of the Equestria Girls franchise, working alongside the human versions of the Mane Six to defend the human world against magical threats. She keeps in contact with Princess Twilight through a pair of magical journals that can send messages to each other, and also power the portal between worlds for when she needs Twilight's help more directly.

Example of:
Tears of Remorse