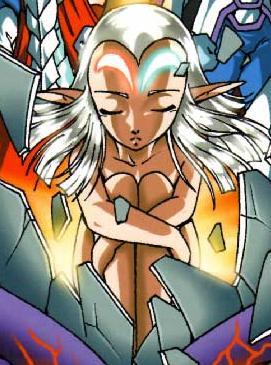 A character is seen in the fetal position

before or after going through some kind of "rebirth": legs folded against the body, head close to the knees and arms crossed in front of the legs.

This is of course highly symbolic, this position being one of an unborn child. The character will also often be nude (for reasons like Naked on Revival or Out-of-Clothes Experience), and sometimes floating (in a void, in a liquid...) to better deliver the analogy with a baby in the mother's womb.

If the character is indeed naked, the fetal position is also a pragmatic excuse for not showing any naughty bits, especially if filmed from the front.

Here, "rebirth" is taken in a very general sense and can mean many things: ascending to a higher plane of existence, experiencing a great revelation, going through a massive physical transformation, healing after a very serious mangling, waking up after hibernation, being removed from storage, etc.

It can even be an actual birth if preceding a Reincarnation, or in the case of an Artificial Human or Clone (frequently seen floating in some People Jars).

To be clear, this trope doesn't concern every instance of a character curling in a fetal position, most likely after a traumatic event — the latter being Troubled Fetal Position. Fetal Position Rebirth is used when illustrating a symbolic (re)birth or major upheaval for the personage.