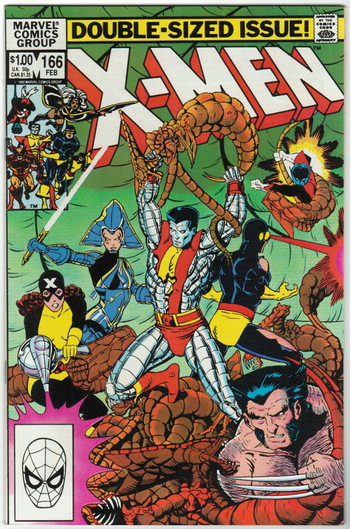 A 1982 X-Men storyline by Chris Claremont, Dave Cockrum and Paul Smith taking place between Uncanny X-Men #161 and 167. It features the X-Men's conflict with a sadistic race of alien parasites known as the Brood. If The Dark Phoenix Saga is the most iconic cosmic X-Men story, this one comes in at a near second.

Much has changed for the X-Men recently, with the team (Cyclops, Storm, Colossus, Nightcrawler, Wolverine and Kitty Pryde) relocating to a remote Atlantean base raised from the depths by their arch-enemy Magneto, being branded as public enemies after infiltrating the Pentagon alongside Carol Danvers, Storm being briefly transformed into a vampire by Dracula and then all of them getting pulled into Limbo in a fight that has left Colossus’ little sister Illyana aged seven years and somehow corrupted by the demon.

None of this compares, however to their most recent conflict with the Shi'ar Empire, in which Deathbird attempted to usurp her sister Lilandra's throne. Aiding her in this attempted coup were a previously unseen race of insectoid alien parasites known as the Brood. The X-Men were successful in stopping Deathbird's coup but the Broods' readings of their unique mutant physiology has left them craving the heroes as potential test subjects. Even worse, Charles Xavier was thrown into a coma after straining his abilities to project his consciousness across the reaches of space with a strange alien figure haunting his thoughts. After weeks spent in his coma, Xavier awakes seemingly unharmed but still weak from the ordeal. Lilandra invites the X-Men and Carol Danvers to her star-cruiser to celebrate the professor's recovery and their sudden good fortune.

And then the Brood attack.

What follows is a Space Opera in the vein of Star Wars and Alien, with the X-Men on the run from the sadistic Brood looking to turn them into unstoppable weapons in service to their monstrous Queen. The X-Men are forced to face their mortality on a scale since unheard of, debate the merits of their super-heroic code of Thou Shalt Not Kill and decide to confront their fate as a family.

The storyline is notable for featuring the last work by artist Dave Cockrum on the main Uncanny X-Men series after reinvisioning the entire corner of the Marvel Universe in Giant-Size X-Men #1. Naturally, his last issue (164) sees him introducing yet another iconic character redesign: Binary. He is followed in artist duties by Paul Smith in #165, who would go on to have a hugely successful run as the regular series artist. Claremont introduces many longstanding concepts to the series such as Lockheed the Dragon, the solidification of Kitty Pryde and Colossus' relationship and the Broods' status as The Dreaded on the cosmic scale. Most importantly, the events of the X-Men's capture at the hands of the Brood leaves Professor X despondent and wondering what the purpose of the Xavier Institute is anymore. This leads to him recruiting the third major class of mutant teens to the academy whose spin-off series begins during the events of this story: New Mutants.

The Brood Saga contains examples of: