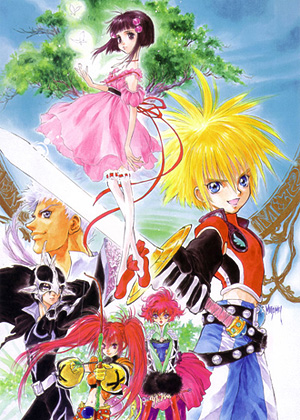 The game picks up eighteen years after the first game ended and tells the story of Kyle Dunamis, son of Stahn. Having grown up on tales of how his parents saved the world, he's absolutely convinced that it's his destiny to follow in their footsteps and become a hero. Thus, as soon as he's of age he goes on a grand journey around the world looking for adventure, and happens to stumble across a Mysterious Waif and an epic quest involving Time Travel and Setting Right What Once Went Wrong. During his travels, he picks up his own band of misfits:

First released in Japan in 2002, Tales of Destiny 2 was the first Tales game on the PS2 (and 6th generation consoles in general), and it did not receive an English version release. The game got an Updated Re-release on PSP in 2007 which was only released in Japan.

Tales of Destiny 2 provides examples of: