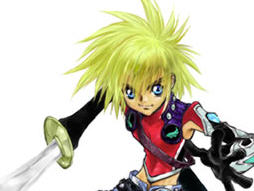 The son of Stahn and Rutee, who dreams of being a hero like his father. One day, he goes off on a quest with his friend Loni, that took an unexpected turn when a girl named Reala was born from a giant lens right in front of him. Since her first words were that she needed a hero, Kyle immediately volunteers, only to get shot down and arrested. After breaking out he catches up to and follows her around on a giant quest involving time travel, evil religions, and an Axe-Crazy Psycho for Hire. It's going to be a long road to learning what it means to become a hero... 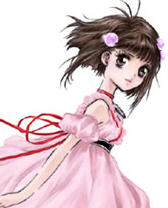 The mysterious girl that appears out of the giant lens in the Laguna Ruins. She can cause miracles using the lens pendant she wears, and is known as a "Holy Woman," same as Elraine. Reala is searching for a hero and this drives the plot for much game, but eventually she decides that her hero is Kyle. 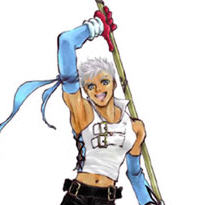 An orphan who lives at the Dunamis Orphanage, and Kyle's best friend. He idolized Stahn and Rutee, and joined the Atamoni Group hoping that one day he could be someone the kids at the orphanage look up to. He and Kyle eventually set out together on a huge adventure to become heroes, and they get much more than they bargained for. 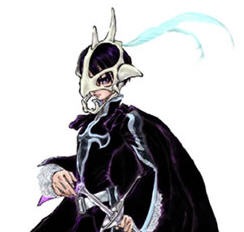 A masked swordsman with no past who broke Kyle and Loni out of jail, and then decided to join them. He's nihilistic, sarcastic, and the token serious guy of the group, which lands him with the title of "token old guy," even though he looks and sounds like a teenager. His true identity is never meant to be a secret from the player.

Voiced by: Tomoko Kawakami, Yumi Kakazu (Tales Of Versus and onward) 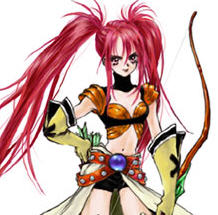 An archer from Calvalese who runs an orphanage in Hope Town 10 years in the future. She has a lot of resentment for the Corrupt Church because they refused to help her sick little brother unless he entered a life of servitude under them in return, and decides to join Kyle's group in the hope that if Elraine is destroyed, maybe the thousands of people who blindly follow her will have a better life. Nanaly functions as the team babysitter. Oh, and you really don't want to make her mad. 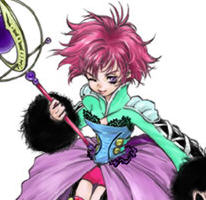 The creator of the Swordians, whom the party meets when they go several hundred years into the past. To everyone's surprise, not only is the genius scientist Harold Berselius a girl, she's also a bit crazy. She joins the party when she finds out their purpose is to kill a goddess, and often threatens to use everyone else as test subjects for her experiments.

One of the three Big Bads of Tales of Destiny 2 and arguably the most popular of the three, Barbatos is an Ax-Crazy man who was erased from history for losing a fight with Dymlos (and many other acts of villainy). And he is BITTER about it. He partnered with Elraine because she promised to restore his place in history. He rampages around time, attacking people, and hating gels and magic. He's easily the series' most popular villain, and has appeared as a Bonus Boss in both Tales of Vesperia and the PS2 remake of Tales of Destiny. He also gets a homage title in Tales of Hearts, which you get by completing an entire playthrough with, well, no items ever. 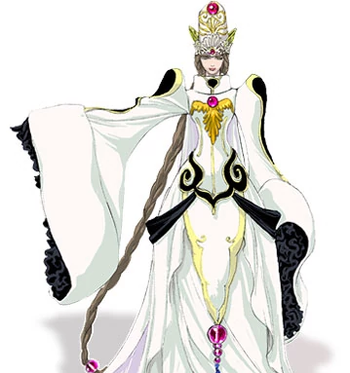 The second Big Bad of the game. She is a holy priestess known to create various miracles and accept Lens donations, rising to prominence later after the events of Tales of Destiny. Unfortunately, she has an ulterior motive: to summon Fortuna as it was ordealed by her, and eventually replace her. For that, she'll need the previous heroes to be killed off.

The final boss of the game. After Elraine's final defeat she appears and talks with Reala, who declares that gods like them are not needed to help humans anymore. This causes Fortuna to snap and declare that if the humans don't need her, she would eradicate them and their history and build a new world. On Fortuna's defeat, time was fixed and events of her interference never happened.

The strongest of fighters in the arena, and Lilith's daughter.