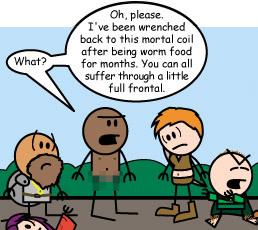 From stiff to... hopefully not.
"Naked I was sent back — for a brief time, until my task is done."
— Gandalf, The Lord of the Rings
Advertisement:

To be alive, you basically need two things: a living spirit/mind, and a fully functioning body. Note that clothing is not included in there. When people are born as babies, they're naturally Naked on Arrival, and the same often goes for resurrections, unless the force that brings people back to life is feeling extra generous to give them a spare set of clothing on top of that. When it's not, expect Shapeshifting Excludes Clothing to precede this trope in some manner.

This trope can be symbolic of the character's rebirth into the living world, of course, or serve to show how fragile life is by having them be vulnerable upon being thrust back into the world. Fanservice is also a contributing factor, but it can turn into Fan Disservice if the character is unattractive and/or wounded.

Expect this to happen when someone Wakes Up At The Morgue.

May often involve a Fetal Position Rebirth. The super trope to this is Naked on Arrival.

Note that there may be spoilers ahead: we're going to have to talk about death if we talk about resurrection.

Bloody Mary is resurrected with Cole's blood, her clothes nonexistent.

Bloody Mary is resurrected with Cole's blood, her clothes nonexistent.