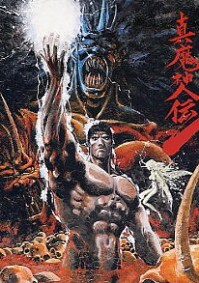 Majinden ("The Legend of the Devil") is a horror/martial arts manga from The '80s, written and drawn by Shinichi Kuruma. Published between 1986 and 1989, it was the first major work published by Kuruma under his real name, as he would go to have a more known career under the pen name Kyoma Aki.
Advertisement:

Riki Hyoudo is your typical highschool slacker and Karate genius who spends his free time conducting martial challenges under a pro wrestling mask. However, unbeknownst to him, he's also the cosmic doppelganger of dimensional devil king lord Byoudo, who learns about a mysterious prophecy related to this oddity and travels to our world to investigate. Byoudo absorbs Riki to get his power, but instead he gets himself absorbed into the boy, and that soon becomes only the first of their problems, as his treacherous lieuetenant Fairy Master Kain initiates a demonic invasion of Earth to kill Byoudo and conquer the plane. Riki and his alter ego will have to team up with aloof demon slayer Toshimitsu Yuuki and Space-Time Continuum inspector Zankan in order to stop the disaster and the rest that will come.

The manga received an OVA adaptation in 1987, Shin Majinden: Battle Royal High School, which enjoyed the curious benefits of having Ichiro Itani in the director chair and Shiro Sagisu in charge of the soundtrack.