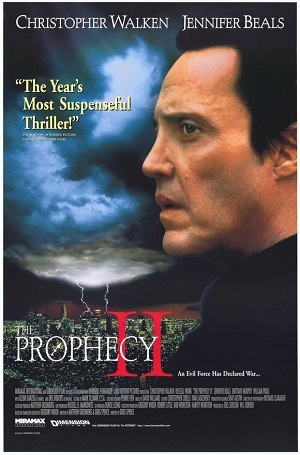 Gabriel (Christopher Walken) is returned to Earth, after being taken down to Hell by Lucifer in the first film. This time around, he tries to prevent the birth of a Nephilim (the offspring of a human woman and an angel) who is prophesied to finally bring the War in Heaven to an end. The Nephilim in question has just been conceived by the angel Danyael (Russel Wong) and hospital nurse Valerie Rosales (Jennifer Beals). Gabriel enlists the aid of a teenage girl named Izzy (Brittany Murphy), whom he resurrects after she commits suicide. Everything comes to a head in the dilapidated Garden of Eden when Gabriel kills Danyael in battle, only to be defeated by Valerie and turned human by the Archangel Michael (Eric Roberts).