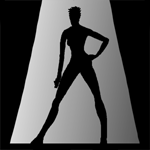 ("A star") is a sci-fi webcomic telling stories from a human civilization in the center of our galaxy, and more specifically, the covert search for a particularly powerful bit of Lost Technology, and the lives ruined by it. Here, energy and raw materials are abundant and life is cheap. Initially, the story mainly focused on Vero Plank—a former employee of Solvan Mars—who became rogue after an incident from radiation leak that claimed the life of his friend. Then the story changed when he met Selenis Zea and became her unwilling accomplice to her goals, which led them to an abandoned Perriman cloning facility that led to Selenis' demise except for the fact that she had a clone to be activated upon her death. The rest of the comics from that point became focused on Selenis and her continuing goal for perfect cloning technology.A* is in a cinematic widescreen format, and updates Monday through Friday.