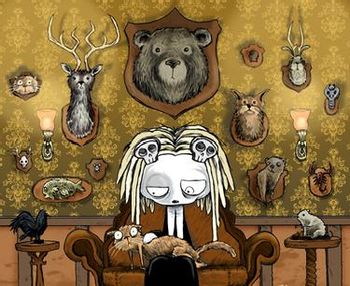 She really loves animals.
"What lurks inside this reanimated Ragamuffin is what lurks inside the one true heart of all of us - six tenths good intentions driven on by three tenths impish malevolence roughly speckled over by one tenth sheepish faux naivete."
— Nivek Ogre, introducing volume 2.
Advertisement:

A series of comic books by Roman Dirge that revolve around Villain Protagonist Lenore, who is a fictional character inspired by the poem Lenore, by Edgar Allan Poe.

The comic tells the dark, humorous adventures of the title character, a strange girl named Lenore, and her variety of friends. Common themes are the reinvention of children's songs, games, and nursery rhymes to something more macabre, and subverting all sorts of pop culture icons and cultural figures into topics of dark comedy.

Lenore's actions often result in the death or injury of those around her, and in various forms of chaos, yet she is not a malicious character, and often thinks she is doing good. Lenore is not the sole focus of the comic, with many stories featuring one-time characters (One of these characters, Samurai Sloth, is set to star in his own series). Also featured are humorous, semi autobiographical accounts of events that happened to creator Roman Dirge, titled Things Involving Me.

Lenore was also featured in a set of 26 short flash movies for Sony's Screen Blast website.

But since Sony has copyrighted most of the episodes but a couple survived, the entire playlist of all the episodes by a spanish Lenore channel can be found here.

This comic features examples of: