Our Clones Are Identical 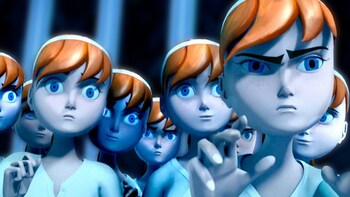 "Cloning, wow. Who would have thought? There should be a list of people who can and cannot clone themselves."
— Ted Danson
Advertisement:

An index of tropes having to do with clones and cloning. Not to be confused with tropes about twins. Nor are these about characters who are merely similar to other characters. This index is about duplicate people. Also closely related to the Doppelgänger index.