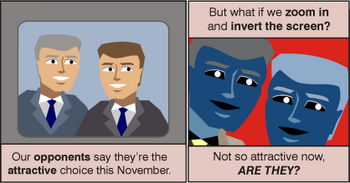 Photoshop Filter of Evil is a trope about when a news program and/or documentary shows a photo of a criminal/victim in color, then shows a eerie black and white/negative of the photo to emphasize something malevolent about the person. Often combined with a slow zoom on the subject's now-black eyes, just to spotlight the creepiness.

You'll also hear a sound effect as the photo switches filters, like someone is throwing the giant "make negative" lever. Usually something like a giant clunk, followed by the sound of rusty nails on a blackboard.

Something very close to this actually happens in real life, as anyone who has had the lights suddenly go out on them can attest; the latent image on the retina tends to be chroma-inverted due to "bleaching" of the rod cells.