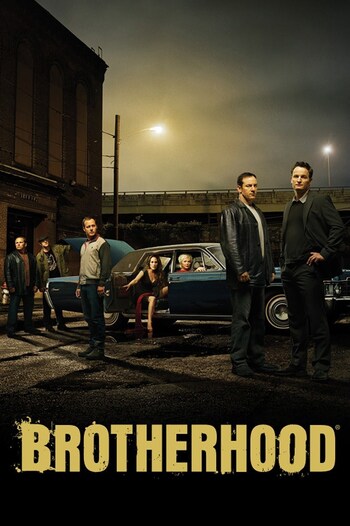 Showtime's short-lived mob series. Was often overlooked as a corned beef and cabbage flavored version of The Sopranos but was very much its own beast. If anything it shared more in common with another HBO show, The Wire. Lasted from July, 2006 to December, 2008. A total of 29 episodes in three seasons.

The show followed the exploits of two extremely morally dubious brothers in New England in different positions of power: Tommy Caffee (Jason Clarke), the young brother and up-and-coming star in the Rhode Island House of Representatives, and older Michael Caffee (Jason Isaacs), freshly returned from a seven year exile and ready to rage his way back to the top of The Irish Mob. The further each brother goes to pursue their own power brings them deeper and deeper into a world of extreme Black-and-Gray Morality until its hard to say who is more of a monster.

Very Loosely Based on a True Story, the show is very visibly influenced by the story of the Bulger brothers from Boston (Whitey being a notorious Irish mob boss, and brother Billy being in the Massachusetts State Senate). Shot entirely on location in Providence, Rhode Island, the show is New England to the core, though some liberties are taken with the location to make it resemble South Boston more than Providence.