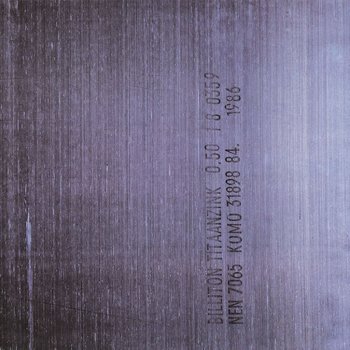 "Why can't we be ourselves like we were yesterday?"
Brotherhood is the fourth studio album by English Alternative Dance group New Order, released in 1986. Compared to its predecessors, which were straight Post-Punk (in the case of Movement) and straight Alternative Dance (in the case of Power, Corruption & Lies and Low-Life), Brotherhood takes a more unconventional approach to the band's sound. Specifically, it is a Distinct Single Album, with side one consisting entirely of straight post-punk songs and side two consisting entirely of straight Synth-Pop. While it wasn't made explicit at the time, the decision to do this stemmed from Creative Differences between vocalist Bernard Sumner, who preferred the band's electronic sound, and bassist Peter Hook, who was adamant about the group remaining a rock band. These differences would grow in magnitude for the remainder of the decade, ultimately spilling over during the production of Republic, prolonging it to the point where it released the year after Factory Records went bankrupt.
Advertisement:

Brotherhood was another considerable commercial success for New Order in the UK, topping the Independent Albums chart and peaking at No. 9 on the broader albums chart. In the US, meanwhile, it performed much more modestly, peaking at just No. 117 on the Billboard 200. Despite this, the album's sole single "Bizarre Love Triangle" (released a month after Brotherhood) peaked at No. 4 on Billboard's Top Dance Club Songs chart and at No. 8 on the same outlet's Dance Singles Sales charts (despite not making the Hot 100), serving as New Order's Breakthrough Hit in the United States and acting as a prelude to their greater mainstream American breakthrough with Substance the following year. The track would also gain a huge Periphery Demographic among the Asian American community, complimenting the band's earlier popularity among the black urban crowd. New Order's American label, Qwest, later reissued the single in 1994 to promote its version of the band's (the best of) NewOrder compilation the following year, with the reissue peaking at No. 98 on the Billboard Hot 100.

Conversely, the 12" version of "State of the Nation"— initially a non-album single— was added on Factory Records' CD release of Brotherhood. Most later CD reissues would retain this amendment to the tracklist, with the sole exception of Qwest Records' American CD release of the album in 1988.