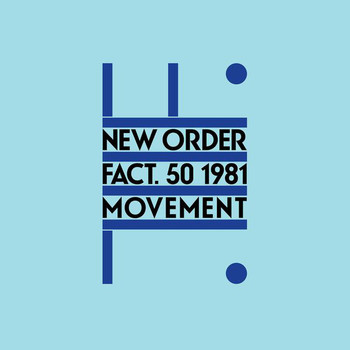 "No looking back now, we're pushing through."
Advertisement:

Following the suicide of frontman Ian Curtis the previous year, the members of Joy Division decided to continue recording music, appointing guitarist Bernard Sumner to vocals and changing the band's name in compliance with a pact they made that required them to do so should any member be removed from the lineup. The band previously debuted the "New Order" moniker in January with the release of their debut single, "Ceremony", a Joy Division song that had been written but only rehearsed prior to Curtis' death, and followed that up with "Procession" the following September (alongside a re-recording of "Ceremony" with new member Gillian Gilbert on guitar). November's Movement, however, was the first time the band attempted a proper studio album as New Order.

Produced by regular Joy Division collaborator Martin Hannett, the album acts as a continuation of the sonic palette explored on Joy Division's second and final album, Closer. While the arrangements are comparatively more minimalist, veering closer to cold wave in the process, synths are present on all but the opening track, and the album's general sound acts as a middle ground between the Post-Punk that made Joy Division famous and the electronic sound that would define New Order's forthcoming career.

The album was the band's first to have a concurrent U.S. release, on the American version of Factory Records, distributed by fellow indie label Rough Trade after Joy Division's belated American releases. Conversely, Movement was the last of New Order's Factory-era studio albums to be released on Quincy Jones' Warner (Bros.) Records-based Qwest Records label, first appearing on CD in 1989 as a mailing club-exclusive release before appearing in brick-and-mortar stores on CD and cassette in 1992; Factory US briefly put out their own CD release in 1987 before Qwest's supplanted it. It would not be the last Qwest Records release of New Order material though, with the band still releasing material in the US through the label up until their jump to Reprise Records for US distribution in 1998 with Warner's reissue label Rhino Records handling the band's back catalog after the dissolution of Qwest.

A late 1981 performance at the Ukrainian National Home in New York City was also recorded for a home video release, Taras Schvenko, in 1983. The video shows New Order's unusual performance style at the time, with a short set, moody lighting, no stage announcements and Peter Hook playing with his back turned to the audience much of the time, all of which seemed to take the already insular nature of Joy Division's performances and bring them even further inward. The performance video would later be reissued with the band's 1998 performance at the Reading Festival (their first after the hiatus following Republic in 1993) on the New Order 3 16 DVD. For the 40th anniversary of Movement, the performance was also uploaded in song-by-song segments to the band's official YouTube channel.

Like the Joy Division duology, Movement was not supported by any singles. However, the band did release three non-album singles between December 1981 and March 1983— "Everything's Gone Green", "Temptation", and "Blue Monday"— which became a crucial outlet for New Order to re-focus their sound and gradually shift into their Signature Style that blended post-punk and Synth-Pop. "Temptation" ended up becoming the Trope Maker for Alternative Dance, and "Blue Monday" would serve as the band's Breakthrough Hit in the UK, helping bolster the sales of Power, Corruption & Lies two months later.

"The trope begins, collapsing without warning":