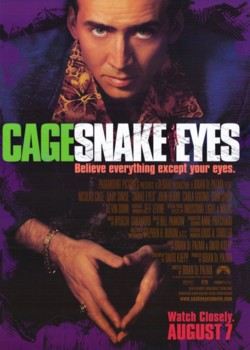 Rick Santoro (Cage) is a corrupt police detective, serving in Atlantic City, New Jersey. He has been bullying people and accepting payoffs for years. One day, Rick attends a heavyweight championship boxing match. Also in attendance is Charles Kirkland (Joel Fabiani), the United States Secretary of Defense. Among those escorting Kirkland is Kevin Dunne (Gary Sinise), a Navy Commander and close personal friend of Santoro. During the match Julia Costello (Carla Gugino) attempts to approach Kirkland. Sudden gunshots wound Costello and kill Kirkland. Havoc ensues throughout the arena as the fight is stopped and fans stampede toward the exits.

Rick is at first determined to track Julia, considering her a suspect. He soon realizes however that Kirkland was killed due to an unpopular decision of his, canceling a missile defense project. Certain elements of the military forces felt the project was necessary. The corporation hired to create the project wasn't happy either. Rick finds himself facing a conspiracy, with the conspirators being far more ruthless than him.