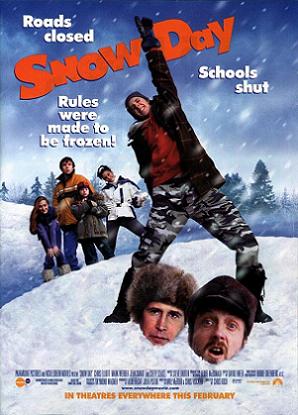 By the look of this poster, you would swear Chevy Chase's character is one of the bad guys.
Advertisement:

Snow Day is a 2000 Nickelodeon movie about… a snow day. Or, more specifically, the crazy events that happen on one particular snow day. It's written by Will McRobb and Chris Viscardi, directed by Chris Koch, and has a cast including Chris Elliott and Chevy Chase.

When an entire town in upstate New York is closed down by an unexpected snowfall, a "snow day" begins when a group of elementary school kids, led by Natalie Brandston, try to ensure that the schools stay closed by stopping a mechanical snowplow driver by trying to hijack his plow truck. Meanwhile, Natalie's big brother Hal is using this day to try to win the affections of Claire Bonner, the most popular girl in his high school, while Hal and Natalie's father Tom, a TV meteorologist, faces off against a rival meteorologist for weather coverage of the day's events.

The film was originally written as and intended to be a spin-off movie of The Adventures of Pete & Pete. The idea however was abandoned and eventually reworked into its own thing with a new cast hired to play similar but different characters as well. Despite that, it kept the same surreal and exaggerated tone of the show even if that wasn't abundantly clear to those who were unaware.