Known as "Counterterrorist Group Delta" by the Pentagon, G.I. Joe was created by Generals Joseph Colton and Lawrence Flagg to serve as a Global Integrated Joint Operations Entity for NATO. 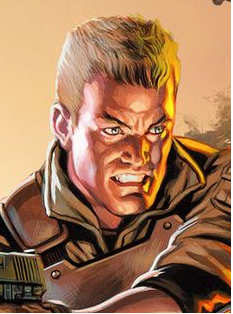 The First Sergeant of the G.I. Joe team, and the poster boy of the franchise. Second in command of the Joe team and main battlefield leader. 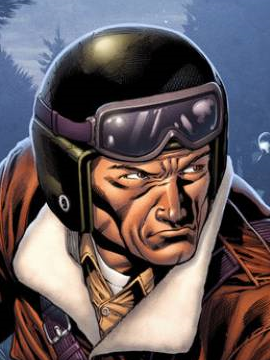 The leader of the Joes. 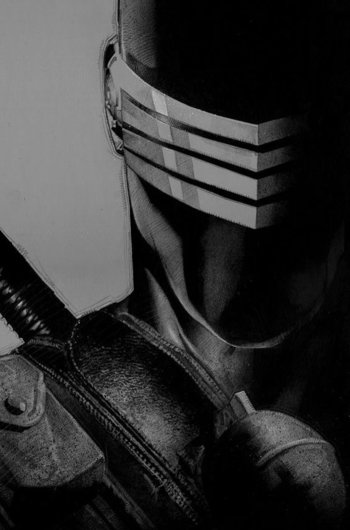 A soldier who, after The Vietnam War and the deaths of both parents and his sister, was invited by his platoon fellow Tommy "Storm Shadow" Arashikage to study martial arts under the Arashikage ninja clan, and they soon became Sword Brothers. Now Snake-Eyes is a member of G.i. Joe while his former friend joined Cobra. A tragic helicopter mission took away his voice and scarred his face, so he's mute and never removes his mask around others. 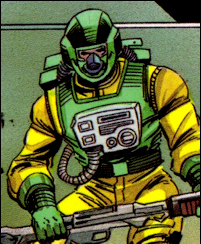 A weird kid who became an even weirder adult, Airtight serves as the team's Hostile Environment specialist.

Mountaineer who grew up in Idaho. Best buddies with Bazooka. 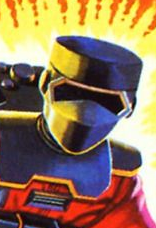 The Emergency, Fire, and Rescue specialist for the team. 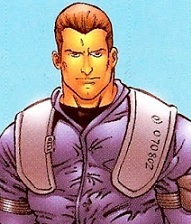 A high altitude sniper and reconnaissance expert who is also a fairly decent fixed-wing pilot. He is the brother of Bombstrike and Blackout.

Armor Defeating Weapons Systems specialist. Former tank driver, until he realized how vulnerable tanks were to rocket launchers, and transferred to anti-armor. Best pals with Alpine.

Ranger. Growing up both dirt poor and a bully target drove him to overachieve. When the Joes called him up, he went in without hesitation. Has a crucial role in the team as the Joes' drill sergeant, being the final arbiter on whether rookies are ready to join the team. 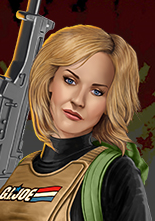 The sister of Barrell Roll and Blackout, Bombstrike became a capable soldier in her own right, serving as a Forward Air Controller in the Air Force before joining the Joes as an infiltration specialist.

An expert in communications and computer technology. 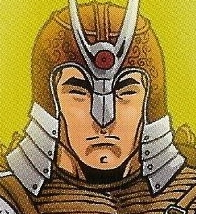 A martial artist who combines military discipline with the code of the samurai.

A West Point graduate and quarterback who joined G.I. Joe as an hand-to-hand combat specialist. He was the field commander of G.I.Joe in the first season of the DiC cartoon.

A French-Vietmanese intelligence officer, and half-sister of Anastasia De Cobray, also known as the Baroness.

A former CID investigator who serves as the Joes' primary deep cover operative.

A mechanic and driver of the VAMP jeep. He gets a far bigger role in the comic than he ever did in the cartoon, and gets one of the biggest roles out of the original squad of "green fatigues" guys.

A former professional model who decided she'd rather drive tanks for a living. 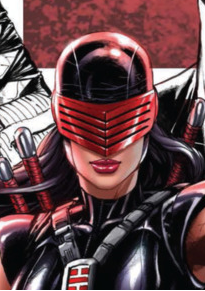 A former Cobra Youth member who got exposed to the memories of the original Snake-Eyes after a session in the Brainwave scanner, Dawn joined the team to carry on the legacy of her predecessor.

The Joes' affable but nerdy radioman.

A green beret member of G.I.Joe who frequently leads the Night Force, the team's black ops division. He is Duke's brother in the Sunbow/DiC cartoons and Renegades.

The Joes' Warrant Officer is best known for his relationship with fellow Joe Lady Jaye. In the cartoon series, he serves as Duke's second in command until the debut of General Hawk, when he is bumped down to third.

Mentor to Hawk and successor to General Colton, Flagg created the modern iteration of the team, handpicking many of the original recruits himself.

The Joes' stealth pilot, not to be confused with the superhero of the same name.

Leader of the Adventure Team, the G.I. Joe Team's predecessors. He sometimes appears to help the team named after him.

The first Marine on the Joe Team, this crazy Cajun is known for his rough and tumble attitude. Before enlisting in the military, he was a notorious brawler and knife fighter throughout New Orleans. He's a "Recondo", a member of Marine Force Recon, the Marines' special forces scouting and reconnaissance experts.

A strongman who, to the surprise of his teammates, is also a classical musician. His musical background helped him develop the dexterity needed to operate specialized heavy weapons systems. 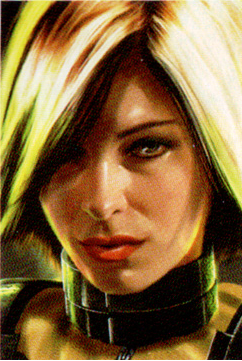 An infiltration expert with a unique mental condition, "total battlefield awareness", that allows her to perfectly track everything going on in a fight at once, giving her near-perfect fighting skills.

An Arashikage kunoichi and Storm Shadow's cousin. Occasionally does intelligence work for the Joes, her stealth and infiltration skills are said to be second only to Snake-Eyes.

The son of a Crimson Guard, and Snake-Eyes' apprentice. 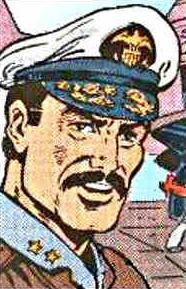 The director of Naval Operations for the team, operating from the U.S.S. Flagg supercarrier. 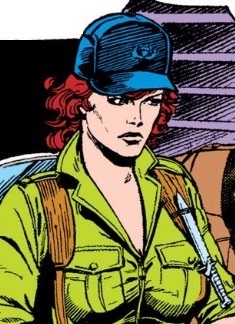 A gifted linguist and covert operations expert, she has led many undercover missions to the G.I. Joe team.

An M.P. and the third dog handler on the team.

A staunch pacifist who serves as the Joes' medic. 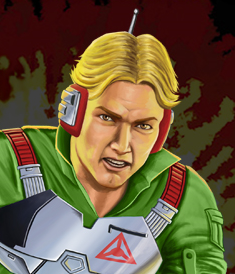 A former CIA Psy-Ops agent who is also a licensed psychiatrist. After a stint at Fort Bragg's Deceptive Warfare Center, he joined G.I. Joe, serving as the team's counselor, profiler, and interrogator.

A martial arts stunt double who joined the G.I. Joe team. A movie buff, he frequently quotes films in bad impressions, annoying his teammates. He was used a lot in the cartoon — much more so than Snake-Eyes, who couldn't talk and was thus not focused on much. He had almost as many solo shots as Shipwreck. By contrast, the comics saw him as an also-ran who was easily defeated by Storm Shadow (using improvised weapons versus Quick Kick's Nunchaku, embarrassingly enough).

The G.I. Joe team's heavy machine gunner, as well as their cook. His dream is to become a gourmet chef, and joined the army after learning they could train him as such.

A rocker from California who likes big guns, surfing, and not wearing shirts.

A rough and tumble Joe with a distrust of high-tech weapons. 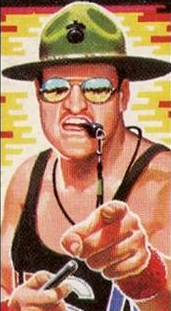 A fictionalized version of a certain WWF wrestler, Sgt. Slaughter oversees the Joes' training and commands two sub-factions of the team, the Renegades and the Marauders. He is also skilled at driving armored vehicles, treating them the same way as he treats a new recruit: Pushing them to limits of their performance and specification. 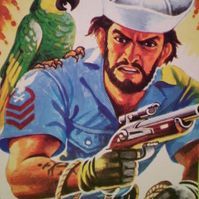 Navy Senior Petty Officer, SEAL, and the Joes' maritime warfare expert. He was a major character in the cartoon, featuring as a major player in more episodes than anyone short of the main cast of Duke, Flint, Lady Jaye, Destro and Cobra Commander.

The Joes' expert scout and tracker. Highly spiritual and one with the land (hence the codename).

A former street gang leader prior to his enlistment. During The Vietnam War, he served at the same Long Range Recon Patrol as Snake-Eyes and Storm Shadow. He also helped Hawk to assemble the G.I. Joe team and recommended Snake-Eyes to him. Larry Hama based him off of a real person, and he was the most commonly-seen field leader in the comics. Because of this, he also had the longest list of failed missions, though it never got held against him. Similarly, he always got stuck with many "unpopular decisions", such as leaving dead Joes' bodies behind or abandoning the missions. 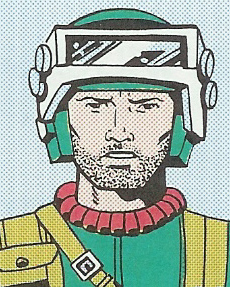 The team's armored warfare expert, driver of the MOBAT Tank. 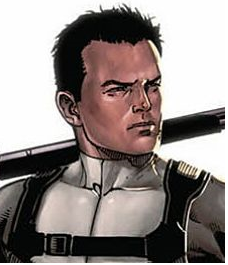 The first SEAL to join the team, specializing in stealth and demolitions. He is also a certified diving instructor. Larry Hama named him after Steve Leialoha, one of his co-workers at Marvel Comics.

The explosive disposal expert of the G.I. Joe team.