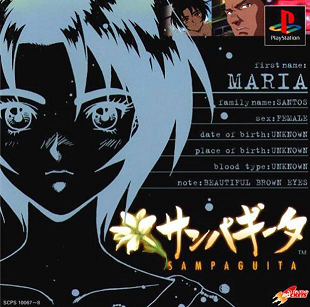 "Will you love me forever?"
—Tagline in the trailers of the game, said by the main heroine, Maria
Advertisement:

Sampaguita (サンパギータ) is the third entry in the interactive anime Visual Novel series Yarudora, produced by Sony Computer Entertainment, and developped by Sugar&Rockets and Production I.G. The game was initially released in 1998 on Playstation 1, then re-released in 2005 on Playstation Portable.

Autumn, in Tokyo. In the middle of a rainy night, the main protagonist (i.e. the character controlled by the player), an Ordinary University Student, comes out of a mixer party organised by his fellow comrades of his part-time job. The train and bus services are long over, and there's no taxi around: he has no choice but to walk his way home, bemoaning on how his friends manage to get girls so easily while he doesn't.

Suddenly, a police car comes his way. Thinking about it, there were an awful lot of them moving around the station... The policemen in the car ask the protagonist if he has seen a South Asian-type individual nearby, to which he answers he didn't. The policemen let him go while asking him to call them in case. A few minutes later, in a dark backstreet, the protagonist has a chance meeting with a girl. She clearly is Southeast Asian, has a wound at the forehead, she's limping, and has lost her memories: the only thing she remembers is her name, "Maria Santos". Touched by her plight, the protagonist carries her back to his home.

Once there, they examine the girl's belongings. Inside her bag, they find two photos; a wad of cash; a make-up set; a cassette tape... and, to their surprise, a small, but real handgun. Maria being cleary in shock and tired, the protagonist puts her to bed. The following morning, the protagonist goes to his work, assuming that Maria would have slipped away when he would come back in the afternoon. Instead, he finds his flat cleaned-up and Maria still there. "I have nowhere else to go..."

And thus begins the protagonist and Maria's cohabitation, as they go on a quest for her identity. As time passes, their relationship blossoms into romance. But their love will soon be put to test, as a mysterious man from the Philippines will appear, and the Yakuza, the Triad, and the Japanese police will come after Maria, and not for good intentions...

The "Autumn" title of the four original Playstation 1 Yarudora games, Sampaguita was directed by Mizuho Nishikubo (Ghost in the Shell movie, The Mysterious Cities of Gold, Patlabor 2 The Movie), and the character design is courtesy of Shirow Masamune (Ghost in the Shell, Appleseed) and Takayuki Goto (Blue Seed, Please Save My Earth OAV).

BEWARE, this game is very story-driven. DO NOT HIGHLIGHT THE MARKED SPOILERS BELOW if you want to keep the full experience of the game. You Have Been Warned.

This game presents the following tropes: