The Trees Have Faces 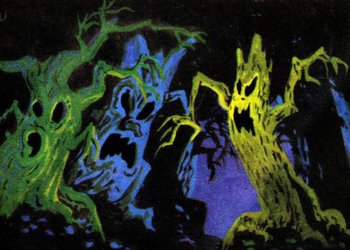 "The trees in this forest are weird, aren't they? I've heard sometimes they smile wickedly... I'll tell you, if I see a tree smiling, I'm gonna run in the opposite direction!"
— Goombario, Paper Mario 64
Advertisement:

It's fairly common in fiction to see trees depicted as having faces, or at least face-like structures, in their trunks. This is typically inspired by how real trees can often seem to have faces due to patterns of knots, scars, holes or broken limbs suggesting eyes, noses and mouths, often in scowling, leering or exaggerated expressions.

Fictional takes on this often exaggerated the resemblance of these features to human faces, giving trees much more detailed features and faux expressions. Often, trees may be depicted as entirely hollow, with breaks in their trunks forming their faces. Other times, a jagged mouth-like opening may reveal a dark space from which gleaming eyes peer out at the world. It isn't unusual to also have low-growing, leafless branches sticking out from these trees and bearing remarkable resemblances to clawed or skeletal hands, further adding to the anthropomorphism.

More often than not, this is only a visual detail, meant to make a particular place seem eerie, spooky or otherwise unsettling. Some depictions may however go further and have the trees actually be able to see and speak. In some cases they may well become actively aggressive, overlapping with When Trees Attack, but more often than not they'll simply be harmless, if creepy, parts of the background. Occasionally, people who are turned into trees may retain twisted versions of their former faces as the only mark of their former state.

Some cases will depict this as taking place largely in a character's head, with the exaggerated faces and menace of the trees being a byproduct of confusion, fear and suggestive shapes and shadows; in this case, what's seen on screen isn't "really" what's present in the fictional world, but rather the character's perceptions displayed as the work's point of view. Once things calm down or day breaks, the monstrous trees will return to the much less frightening shapes they actually hold.

While stands of these trees can be found growing wherever spooky vibes gather, they are especially common in Halloweentown and the darkest Enchanted Forests. In video games, they're often common scenery in The Lost Woods and Big Boo's Haunt. If the trees have functional limbs in addition to the faces, you're likely dealing with Treants. More benevolent and aware specimens are likely to be a Wise Tree.

The trees not only have faces, but are alive and can talk (and whisper).

The trees not only have faces, but are alive and can talk (and whisper).