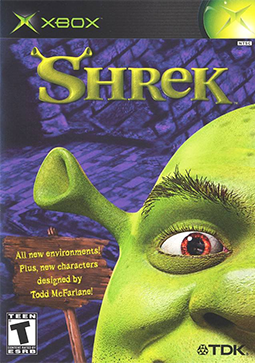 In 2001, Shrek was released, and as with most media, it got a tie-in game released to coincide with it. Taking place after the movie, the game revolves around Shrek going on a quest to save his recently wedded wife, Fiona, from the clutches of the evil Merlin. Originally released for the Xbox, the game was ported to the Nintendo GameCube nearly a year later as Shrek: Extra Large.
Advertisement:

As a historical footnote, the Xbox version of the game was the first video game to use deferred shading