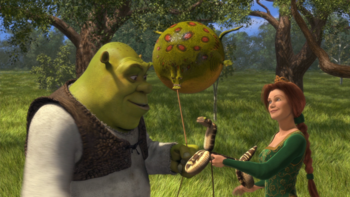 "Don't blow him up too much or he'll croak."
Shrek and its sequels are simply packed with tons of hilarity, but this page is for examples from the first film, as well as any Shrek media without its own page. Keep examples from the other films on their own designated pages.
Advertisement:
open/close all folders
Shrek
Shrek Shorts
Scared Shrekless Shrek the Halls