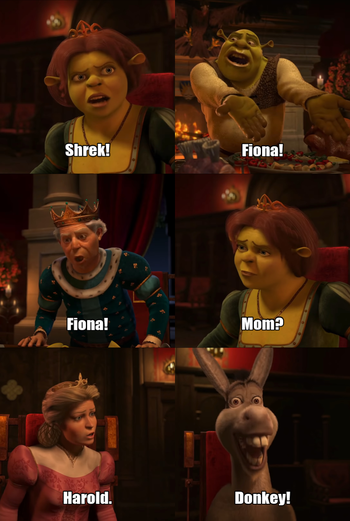 "It's so nice to have the family together for dinner."

Shrek: That's okay buddy. We're from the union.
Elf: The union?
Shrek: We represent the workers in all magical industries, both evil and benign.
Elf: [perks up] Oh, oh right.
Shrek: Are you feeling at all degraded or oppressed?
Elf: [turns away the microphone connecting him to Fairy Godmother] Uh, a little... we don't even have dental.
Shrek: [to Donkey, disgusted] They don't even have dental. [starts walking inside] Okay, we'll just have a look around. Oh by the way, I think it would be better if the Fairy Godmother didn't know we were here. Know what I'm saying? Huh?
Donkey: Huh? Huh?! HUH?!
Shrek: Stop it.